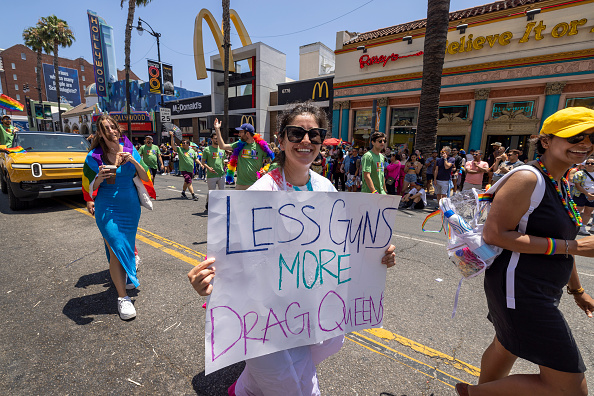 A Bipartisan Coalition Has Agreed on Gun Safety Legislation. Will It Matter?

A bipartisan group of 20 Senators (10 Democrats, 10 Republicans) reached an agreement (that could still easily fall apart) over gun safety. It’s not what the Democrats want. It’s more than most Republicans are willing to give. It doesn’t do much to control the sale of guns. It provides more money for mental health resources, with added mental health resources for schools, which is good, even if the Republicans only use mental health problems as an excuse to avoid enacting real gun control. Maybe some of that money for mental health counseling will go to people who need it (and not just potential mass shooters). It would also extend the prohibition against owning a gun from spouses with domestic violence convictions or restraining orders against them to dating partners — eliminating the so-called boyfriend loophole — which is also good.

It will not ban the sale of assault weapons to those under the age of 21, which seems like the thing most necessary to prevent school shootings, but it supposedly will include enhanced background checks for those under the age of 21 to give sellers time to check their juvenile and mental health records (will it prevent children from using their parents’ assault weapons? No). It will also increase funding to states to enact red-flag laws — if they want to. Such laws would allow authorities to confiscate guns from people deemed to be dangerous. The problem is, the states with the worst gun problems are less likely to enact these laws, and from what we’ve seen with past shooters — who always seem to have a history of violence or dangerous behavior — the cops rarely do anything about it, anyway.

Ultimately, will this stop mass shootings? No. Will it prevent a shooting here and there? Maybe. Is something better than nothing? Let’s wait and see if something actually passes. I mostly feel like this is something the Republicans want to pass so they can get angry voters off their backs ahead of the midterms without losing any Second Amendment nuts. It’s also something with which Democrats can say, “Look! We did something.” What I’d hate to see, however, is this half-assed legislation take the gun control issue off the table in the midterms. Truthfully, I think it will probably die on the Senate floor unless there is another school shooting in the near term, which is probably what Republicans are banking on with summer recess beginning soon.

If it gets through the Senate, it still has to get through the House, where they’ve already passed far more restrictive gun legislation. It’s unclear, however, if the progressive wing of the House would sign on to a half-assed (1/8th of an ass) measure. And if they don’t? Well, I’m sure that both moderate Democrats and Republicans will enjoy piling on ahead of the midterms, which will be a win for them.

The something is better than nothing approach could ultimately go one of two ways after the next school shooting. Either Congress will say: It wasn’t enough, now we have to do more. Or Republicans will say: We gave you what you asked for and it didn’t work, so we give up. As always, it will probably come down to voters. As always, when it comes down to voters, the deck is stacked against Democrats, who have more voters but less power.

Will any of this stop Nazis from harassing the LGBTQ+ community during Pride Parades? Not even a little bit.