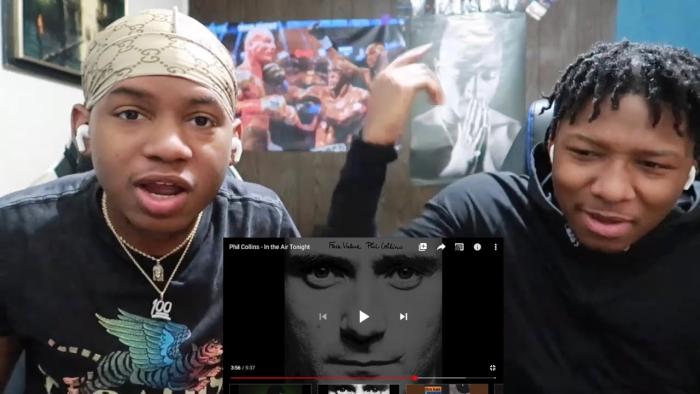 In case you missed it, last week Fred and Tim Williams — two 21-year old twins who review music on YouTube — decided to listen to a banger of a Phil Collins song, “In the Air Tonight,” for the first time. Their enthusiastic reaction to Phil Collins “dropping a beat three minutes into the song” went insanely viral.

This has gone viral, but I’m posting anyway ‘cause it makes me smile. And if you haven’t seen it yet, maybe it’ll make you smile. And Phil has jumped to the top of iTunes ‘cause new folks are discovering and old folk are remembering how dope this song is. pic.twitter.com/fVBnedJP91

I watched it half a dozen times and ended up showing my wife the video, too, because we have a sort of ironic-not-ironic love of Phil Collins. We mention that drum beat in “In the Air Tonight” at least twice a year, and every once in a while, we’ll just listen to Phil Collins on Spotify for half a day.

In any respect, here’s just how viral that video went:


Phil Collins' 'In the Air Tonight' has jumped into the #4 spot on iTunes in the US 40 years after its original release. pic.twitter.com/lAG6tU7kbw


That is an amazing and insane statistic. But you know who deserves it as much as anyone? Phil Collins. You know who else agrees? Starlee Kine.


For those unfamiliar, Starlee Kine and Phil Collins feature heavily in the greatest This American Life episode of all time, and I don’t say that lightly as someone whose only Pajiba 10 mainstay over the last 15 years has been Ira Glass. This American Life is a radio show, but it’s also the grandfather of the narrative podcast. No one has ever done it as well, and no one ever will.

But “Break Up,” which first aired in 2007, is a special episode, and whenever I want to turn someone onto This American Life, this is the episode I ask them to listen to. In it, Starlee Kine — who would go on to host another amazing podcast, The Mystery Show (sadly canceled after one season) — is going through a hard break-up with her boyfriend, with whom she also had a ironic-but-not-ironic relationship with Phil Collins. Kine’s boyfriend dumped her on New Year’s Eve, and she took it hard, and she thought that the best way to get through it would be to write a big, sappy break-up song about it.

Starlee Kine randomly knows someone who knows Phil Collins, and she is able to arrange to talk on the phone with Collins to discuss writing a break-up song. However, what she soon learns is that Collins himself had just recently gone through a divorce with someone he didn’t want to divorce, and he is also heartbroken, so much of the segment is just Collins and Kine commiserating over their break-ups.

“The crazy thing is how honest and normal he was about it,” Kine says in the podcast, and that is exactly what makes this episode so wonderful. It’s just two heartbroken people having a conversation about their break-ups, only one happens to be Phil f**king Collins!

“There’s various people in your life that you never really get over,” Collins says. “And because of children, you are morally obligated and you need to be in touch with this person who really hurt you. It’s not like you ‘can walk away and leave without a trace,’” Collins adds, quoting his own song, “because there’s a couple of little guys looking up to you saying ‘What am I gonna do, Dad?’”

When Kine finally turned to how Collins manages to turn sappy lyrics into powerful songs that reach into your throat and pat you on the heart, Collins was equally open and transparent. The lyrics “may look corny on the page,” he says, but “what’s important is the way that it is sung. Otherwise, you — and I mean no disrespect — you get in Michael Bolton territory. It’s something that gets overblown and polished, as opposed to a simple idea that is simply sung with conviction.”