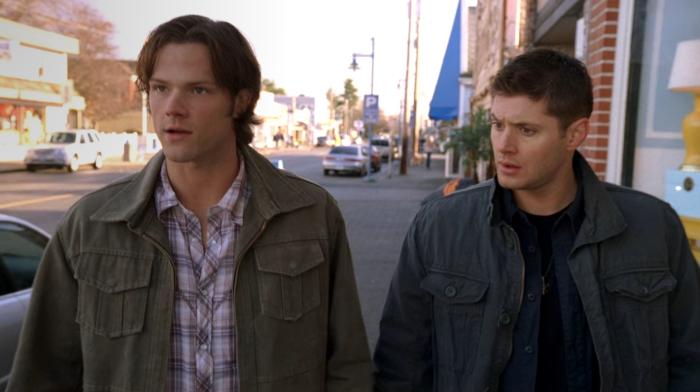 Welcome to Supernatural 101, with Professor Tori Preston! Some of you may be coming into this class having done the assigned reading viewing at some point earlier in your life, while others may be, like Dustin and myself, relative newcomers to this show which has been running for so long, it originally aired on The WB network.

As previewed last week, we’ll be spending all of (our recording time in) August focused on this show (although who knows, maybe we’ll be able to get in brief mentions of other things, like… pickled Seth Rogen? But in the meantime, this week’s podcast centers around the following episodes:

Besides our homework for class, we also briefly discuss the Emmy nominations (and specifically the official Podjiba show of 2019, The Mandalorian, with fifteen nominations in total), get a chicken update from Dustin, and even get some trains passing through Dustin’s living room (at least, based on the sound)!

If you’re going to be sticking around for the whole class, next week’s assignment from our esteemed Professor:

Are you as excited as I am? Because even with my minimal knowledge of the show, I am already VERY excited for what’s coming up.

As always, Podjiba can be found wherever podcasts tend to congregate, as well as embedded below or downloaded right here.