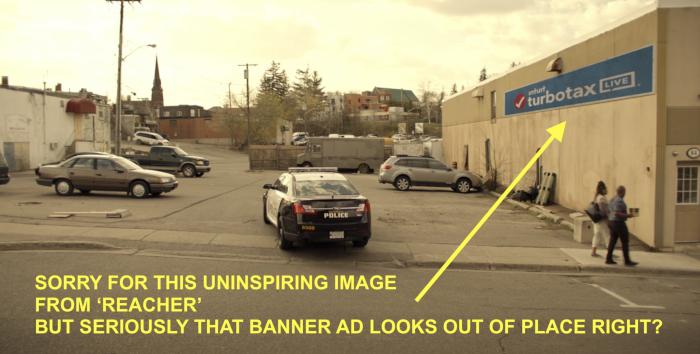 'Book Of Boba Fett', 'Inventing Anna', 'The Afterparty', And More On Podjiba!

First off: Spoilers abound every week, but we did a rolling start this week right into The Book of Boba Fett, so you know, be careful!

Also, if you’re a regular listener, you may recall that last week I may have made fun of Dustin for watching Reacher instead of some of the pleasant comedies that were available, like Murderville. But he said enough things that made me curious to watch the show, so I thought I’d sample one episode.

Then I looked up and I had somehow watched the entire season over the weekend. It was enjoyable! And in a way that nothing stood out in a bad way — I was just along for the ride… which brings me to that photo.

The only time my brain suddenly began to wonder where I was and what was happening was when those TurboTax banners popped up like I was on a late-90s Geocities site. I mean, look, I get they have to pay for the show somehow, and it is tax season, but … this doesn’t really look like it should be there in this random town, does it? Did this bother anyone else? Or just me?

Anyway. As happens with our rolling starts, we didn’t officially start the episode until about 20 minutes in, and then there’s a lot of nonsense about carnivals and crypto which makes no sense (because we have no idea what we’re talking about), so if you want to get back to the TV talk after that, it starts up again around the 45 minute mark.

That’s where we learned that:

-Dustin caught up on The Woman In The House Across The Street From The Girl In The Window!

-Tori talks about Ali Wong’s new special, Don Wong, which I hadn’t seen as of recording (but now have) and basically I concur with her it’s great go watch!

-We revisit our suspects and favorite jokes from last week’s episode of The Afterparty!

Podjiba! Home for all your decent personalities, who you can listen to anywhere you get your podcasts, including right here.


← The Other Shoe Drops at CNN | As Prince Andrew Settles in his Civil Suit for Sexual Assault, the British Press Returns to Royal Sycophancy →