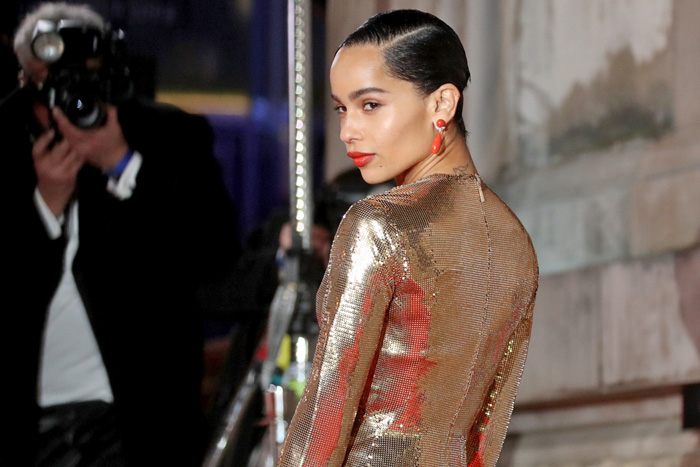 Zoë Kravitz will make her directorial debut with Pussy Island starring Channing Tatum, who apparently used to wear Crocs all the time until she stepped in. So, in a way, this news has two major accomplishments. (Deadline)

OK, last time I passed on the DeuxMoi rumor about Kanye and Irina Shayk, and it ended up being true. So this time, I’m getting in on the ground floor with whoever this person is Brad Pitt might be dating. God, I’m old. (Lainey Gossip)

Helen Hunt tried to get a multi-racial sequel to Twister off the ground, but none of the studios would bite. (Dlisted)

A-Rod wants everyone to know he’s not hooking up with Katie Holmes. (Celebitchy)

From Seth: I very much want to get stoned with these guys. (TikTok)

Kristy Puchko and Angie Han teamed up on the Screen Drafts podcast to rank the very best Internet movies. Listen up to see if your fave made the cut. (Apple)

Lol per a Veritas release just now, this was the "muzzling":

A station official "telling Hecker to 'cease and desist' posting about Hydroxychloroquine on social media." https://t.co/ZH2jDoolht

If you only have a cursory knowledge of the “lab leak theory,” here’s a good, easy to digest — but lengthy — read on why it’s a “mirage” because there are actually mountains of science that explains how COVID-19 could have occurred naturally. (Foreign Policy)

The Breath of the Wild 2 trailer is real, and it’s spectacular. (YouTube)

Megyn Kelly is endorsing letters from prep school parents who are freaking out about… Ziwe? Is she trying to become the new Black Santa? Relax, Meg. (Jezebel)

Cannonballers around the world agree that the hardest reviews to write are the ones for the books that were just ok. About Ruth Ware’s The Woman in Cabin 10, Zirza says, "It’s cheese, but not the good kind, no, the average kind from the supermarket that’s good as sandwich filling but not much else." What thriller would you recommend if Zirza wanted to improve the quality of her cheese? (Cannonball Read 13)