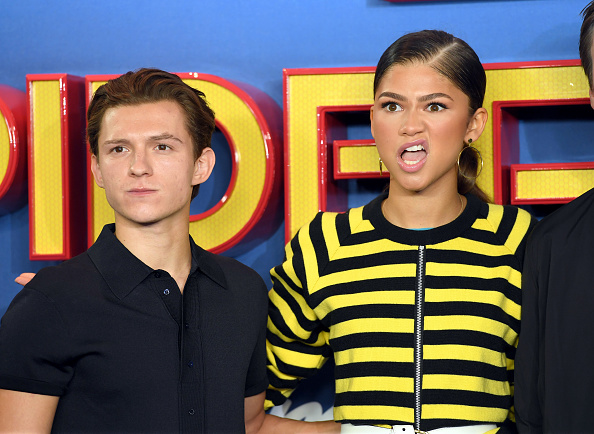 Zendaya and Tom Holland Are a Thing Now

Dustin stole this story earlier (damn him), but linking to it anyway, if only so I can include the below screenshot: Despite a syrupy sweet segment where The View co-hosts said how much they’ll miss Meghan McCain when she leaves, behind-the-scenes, even Whoopi didn’t want to work with her anymore. Thankfully, the new president of ABC News doesn’t give a shit about the McCain family name. (Page Six)

Zendaya and Tom Holland are a thing because, apparently, we have to do this with every single Spider-Man movie. Just let the kids act! (Lainey Gossip)

Chip and Joanna Gaines swear they’re not anti-LGBTQ despite never featuring any same-sex couples on Fixer Upper and filming a conversation with an anti-LGBTQ pastor during the 2016 election. (Celebitchy)

From Jen: A follow up to one of the stories in last week’s Pajiba Love about Racist Sports Jerks. (CNN)

Kristy interviewed Leigh Janiak, the co-writer/director the Fear Street Trilogy, about how this unique take on slasher sequels came together, and how it dodged being killed by Disney. (RogerEbert.com)

“Some reporters who were there won’t go back into the building. A number have sought therapy to deal with the trauma. One longtime Capitol Hill reporter opted for early retirement shortly after living through the riot. Many still aren’t sleeping well.”
https://t.co/bjmgJNWGEZ

Of course, Chris Pratt makes it a matter of record that he doesn’t believe in aliens or beings from another planet. iT’s nOt in tHE bIbLe. (Variety)

Fox News is getting into the weather business, so everyone get ready to argue with racist uncle that Antifa made it snow in Arizona, or whatever crazy shit is about to happen on this doomed rock. (Uproxx)

Not all reviews on Cannonball Read are about the text of the book, sometimes they are about the role of the book in the reviewer’s life. Caragwapa has shared Judy Blume’s Fudge books with her sons to help them each cope with being an older brother. "When the middle child was around 5 years old, eldest child told me, "Mama, you should read Tales of a Fourth Grade Nothing to my younger brother." So I did." What books have helped you cope with life? (Cannonball Read 13)

We may be closed due to tropical storm Elsa but our commitment to our mission continues 24/7. Our two youngest patients at the David A Straz Manatee Critical Center continue to receive around the clock care with the goal of an eventual return to Florida waters. #ZooTampa #manatee pic.twitter.com/JlytZEUs63

← This is not NOT a Val Kilmer Objectification Post | 'Loki', 'Fear Street', 'Top Chef', And More On Podjiba! →