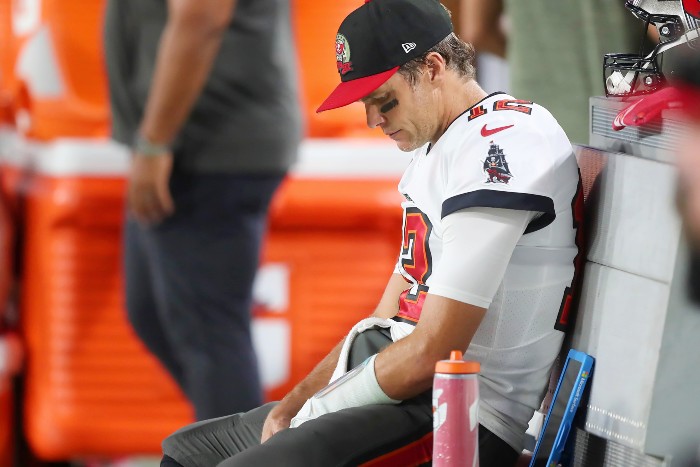 On top of everything going else in Tom Brady’s life, he’s reportedly looking at a complete wipeout of his strategic investment in FTX, the latest crypto exchange to sh*t the bed, and I swear to God I didn’t giggle the whole time I wrote this. That was you. (CoinDesk)

Jennifer Aniston has entered her no f*cks to give 50s. (Lainey Gossip)

Julia Fox’s “relationship” with Kanye hurt her acting career. Uh, good? That’s what you get for pulling an obvious publicity stunt, lady. (Dlisted)

From Andrew: Some wonderful stuff going on in the Superman comics. (Polygon)

Wow, okay, so Britney Spears is not on board with a biopic of her life starring Millie Bobby Brown. (IndieWire)

You know the midterms went badly when even Kayleigh freaking McEnany is out here telling Trump not to announce his 2024 run. (Daily Beast)

Dave Bautista says Daniel Craig was way happier shooting Glass Onion than he was on the set of Spectre. (EW)

Mario flipped off Nintendo for over two hours thanks to Elon Musk’s new verification process, which has been going great today. Just great. (The Verge)

Somehow, Indiana Jones is getting a Disney+ series. (A.V. Club)

Which is interesting because Steven Spielberg is calling out streamers for throwing his friends under the bus. (Variety)

The thought of Justin Bieber running around scared of his neighbor Judge Judy brings joy to my heart. (Rolling Stone)

Caesar’s Wife loves Trent Dalton’s non-fiction project, Love Stories, because it’s about the people in her city, Brisbane. "I’ll pass the Jamaican drummer reliably working outside the casino and wonder if things worked out with his &’twin flame’." Would you share your love story with a stranger?  (Cannonball Read 14)

Welp, I cracked. But in my defense, c’mon…

(For the Small Venn Diagram of God Of War and Matt Berry fans) with Ragnarok releasing today here is:
Matt Berry as Kratos pic.twitter.com/zpQbCBgYpG


← Why Are People So Mad About 'The Crown' Not Being 100% True? | Conan O'Brien Once Laid Under His Desk After A Bad Review →