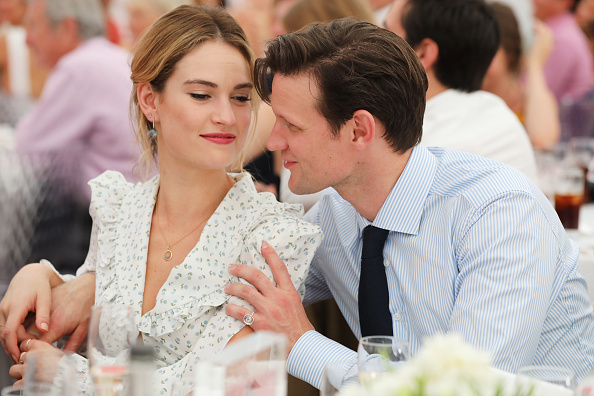 The Matt Smith/Lily James Relationship Gossip is Giving Us Whiplash

Rihanna is winning fashion awards for her Fenty brand and Janet Jackson was there in London to present her the Urban Luxe Award. - (Lainey)

Matt Smith and Lily James were thought to be on the rocks because they haven’t been seen publicly together in months and James was spotted leaving an awards ceremony with a handsome fella named Max. Are they on the rocks? Or are they together? Sort your shit, gossip blogs, and get back to us. (Just Jared)

Have Brits never heard “Simply Having a Wonderful Christmas Time” by Paul McCartney? Because, excuse me, that is far worse than ANY song on this list! Pshaw, I’m not even a MiMi fan, but puh-lease, this is utter bollocks! - (Celebitchy)

As if that song weren’t enough of a hell on earth, how about a 13-hour car ride with three kids? Yeah, no. No, thank you! - (Very Smart Brothas)

Do you have kids who want every tchotchke or toy they see, even more so during December? This mom has a fantastic idea for getting through a store trip without a fight or meltdown. - (BP)

Dr. Pimple Popper made the move to paid video and fans are popping mad! - (Allure)

Oh, Trumpty Dumpty, don’t try to be clever. You will always lose.

Britney Jean turned 38 yesterday (ow, my aching back, I feel older than dirt) and she looks to be doing much better! She spent her birthday ice skating and bowling, and we just always wish good things for her. - (Dlisted)

Roxana shared this and made me laugh, “This Diplo profile is so thirsty. I respect it.” - (The Cut)

Our very own Steven Lloyd Wilson, Ph.D. shared this with us and cheekily added, “As a doctor, I recommend you read this article where I’m quoted as a doctor about Russians messing with our elections.” - (Voice of America)

Ooooh, Go Fug Yourself has an excellent Fleabag giveaway! - (GFY)

Sophia found Becoming by Michelle Obama both relatable (politics is boring) and inspiring. "It was a learning experience to see Obama go into job interviews confidently requesting her required salary and negotiating flexibility so she could take care of her girls. I’m usually just happy to get hired at all, and any kind of salary is a bonus." Have you read the former First Lady’s memoir? (Cannonball Read 11)

Michelle Obama announced today that for Giving Tuesday, she will donate more than $500,000—the proceeds she derived from 2018 and 2019 merchandise sales related to her book, Becoming—to the Obama Foundation’s Girls Opportunity Alliance Fund. I MISS THEM SO MUCH! - (The Root)