You need to understand the context of Kurt Sutter’s series Mayans MC to really understand this joke, but it’s the one in the script for the season 2 premiere that he feels probably led to him being fired from the series (and ultimately, kicked from his FX/Disney deal). It also helps to know that there’s plenty of speculation that Walt Disney was anti-Semitic.

EZ [JD Pardo] and Coco [Richard Cabral] were getting off the bus at the school where the drugs were being processed. There was supposed to be a really gnarly playground out front. Filled with debris, dangerous looking swings, sharp objects, rusty jungle gym, etc. As they exited, Coco sees EZ’s distracted and says: Lighten up Boy Scout, and gesturing to the playground, says, We’re going to Disneyland. EZ replies: Yeah? Guess this is where Walt buried all the Jews he had killed.

Watch out, Ben Affleck! Might have some competition on Raya, the celeb dating app scene. Cousin Greg is single and ready to mingle. - (Lainey)

I was 17 when I knew I didn’t want to have children. With the exception of my father, pretty much everyone I’ve encountered in life has tried to tell me that “I’d change my mind, grow out of it, meet someone and want to have his kids, etc, etc.” I’ll be 50 in a few months and I haven’t grown out of it or changed my mind and yet I still have to explain my choice to people periodically, which is bullshit. - (R29)

As a childfree old, I don’t spend a lot of time on YouTube, so I’m not familiar with MrBeast (or many of the others named in the article) but I’m certainly on board with his and the other 600 YouTubers’ pledge to plant 20 million trees! - (BP)

Kevin Spacey keeps lucking out. Karma better come for this SOB sooner rather than later. - (Dlisted)

Deadspin is all but dead, thanks to the VC vultures who’ve destroyed what once was a hilarious, smart, snarky, brilliant site. Today, Jim Spanfeller, CEO of G/O Media, fired longtime Deadspin Deputy Editor Barry Petchesky. Also, an edict was issued for their writing staff to only write about sports. That’s going well. - (Deadspin)

WHOA, Katie Holmes, your sleeves are real big! Real. Big. Oh there’s a turtleneck under there too? Hmm, I see, I see. You doing ok, Katie? - (Celebitchy)

Gugu Mbatha-Raw does look lovely in pink, however, scroll down to that shiny silver dress - dayum! So good. - (GFY)

The jack-o-lantern stuffed pepper meal aboard Airforce One has probably been talked and written about enough, but I’m not finished talking about it yet. What the hell is in that pepper and what is that thing in the upper left corner? Chicken or pastry? - (Jezebel)

Tori shared this in our Slack, “when a prize sounds more like punishment” - (CNN)

In the words of our Kate, “Fucking finally someone over at the NYT did an article on what patriotism looks like and didn’t interview the same tired five, racist white people in the Midwest who hold on to a dying way of life.” - (NYT)

Lisa Bee had read Craig Thompson’s graphic novel, Blankets, years ago, but picked it up again for the Banned Books square on the CBR11 Book Bingo Reading Challenge card. She remembered mostly liking the memoir. "The art, in particular, I find very visually appealing, dreamy, yet relatable and real." Does hearing that a book was banned make you more curious about it? (Cannonball Read 11)

It’s International Cat Day, so in recognition of that and Halloween, here is my Pixie and her haunted house. 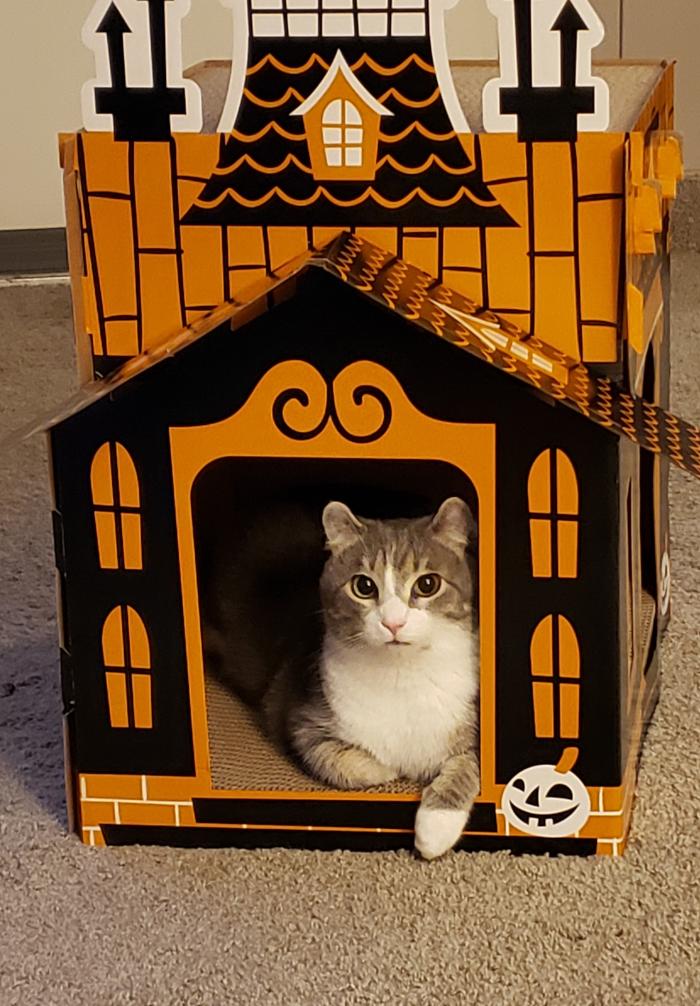 ← 'Rock of Love' Alert: You Can Now Buy Clothes Guaranteed to Impress Bret Michaels | Will 'House of the Dragon' Burn 'Game of Thrones' Fans Again? →