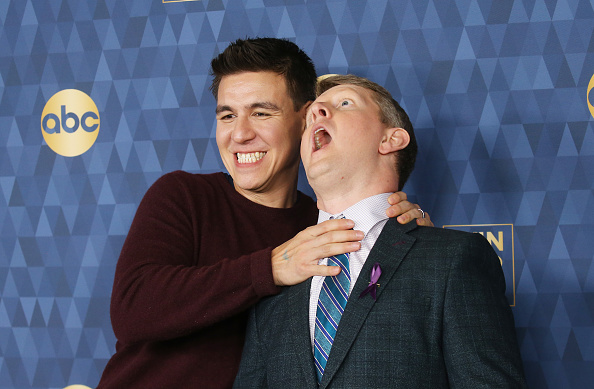 The 'Jeopardy' GOAT Tournament Has Crowned Its Champion

Lizzo and her tiny purse are on TikTok now, and Gwyneth still doesn’t know which Marvel movies she was in. - (Lainey)

The Jeopardy GOAT Tournament has crowned its winner. Here’s a recap of the night’s action. (Uproxx)

"It's true and I should get credit for it" #JeopardyGOAT pic.twitter.com/eO4gT4eI7W

I have an ex with “Serial Killer Resting Face” but he isn’t half as good looking as Sebastian Stan and he might also actually be a serial killer, so ¯\_(ツ)_/¯ - (Celebitchy)

For rilly rill, Chris Crocker, Mieka, and I are gonna’ come for this Galerie Sympa! Leave Britney alone! - (Dlisted)

Obviously the British press has treated Meghan like crap, but here you can see in actual black and white (pun kind of intended) the differences in their reporting of Ducherincess Kate and Meghan. - (BP)

Taika thinks fans should start a petition for the return of IG-11 in season 2 of The Mandalorian. I think fans should just start a general “More Taika in everything” petition. I’d sign. - (SlashFilm)

Don’t scream - I know where you can get your hands on a Baby Yoda (yes, yes, technically “The Child” whatevs) within the next few months! - (Scary Mommy)

Welp, if we thought Thinx, the period underwear, were going to be the future of menstruating, I guess we should thinks again. - (TMS)

Some 300 vomiting, defecating vultures have made a United States Customs and Border Protection radio tower in South Texas their home. The agency is not pleased. https://t.co/O22P2NedV8

Speaking of that, this thread from a former Border Patrol Agent turned immigrant rights activist is fantastic. I highly recommend clicking through and reading all six tweets of the thread. - (ThreadReader)

To those college kids thinking about joining the Border Patrol or CBP, I said, “Do you think you will be riding those horses, ATVs and repelling out of helicopters like the commercials show? No…you’ll be standing at the port sucking up fumes, staring at that fence & standing on

When Boone’s family came home with their new baby, Boone was SO EXCITED! - (Yahoo)

I remember the picture on this book, but nothing about the book. Kate, however, said, “deffo checked this out from the library a LOT as a kid. This tracks.” - (CNN)

AndtheIToldYouSos had Jenny Odell’s How to Do Nothing on her bedside table for 6 months before she finally gave in and read it. She wishes she had read it sooner. "How to Do Nothing is a challenge- not a "how-to". It challenges us to wrest our attention back from corporations and personal brands. It dares us to spend our nothing rebuilding our relationships with our communities, our ecosystems, and those who came before." Do you find it more difficult to engage with the world without giving your attention to corporations or social media? (CannonballRead 12)

← 'You' Season 3 Announced. What Will Happen to Joe and Love? | #NeverWarren Is Trending, But Twitter Is Not Real Life →