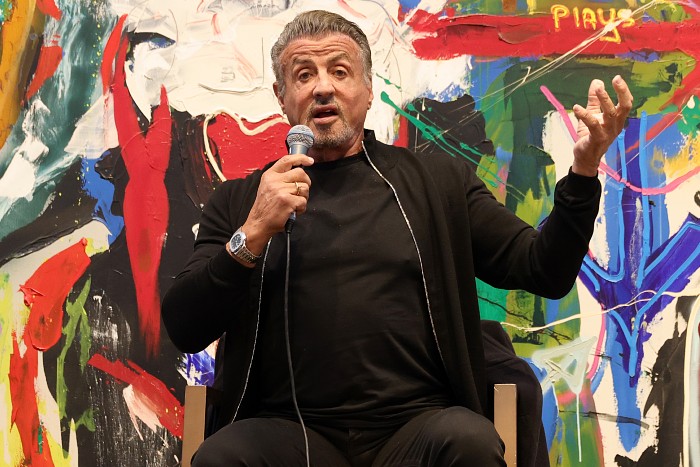 Sylvester Stallone Denies Sending QAnon Message and Wants Everyone To Know He Was Just on a Boat, OK?

In an update on yesterday’s Pajiba Love, Sylvester Stallone would like the record to show that he was not revealing his allegiance to QAnon. He was simply on a boat called the Quantum of Solace that was apparently heading into an actual storm. Lesson learned, I guess? Probably not. See you at the next freakout! (Uproxx)

Jennifer Lawrence makes a rare public appearance in a gorgeous golden Dior gown at the world premiere of Don’t Look Up. (Lainey Gossip)

Josh Duggar’s wife stormed out of the courtroom during his trial. Because of the evidence against him? Nope! Because it was revealed he uses the same password for all of the family’s online accounts and his… other stuff. (Dlisted)

Miley Cyrus loves her raspy voice and refuses to sing with a falsetto. (Celebitchy)

Kayleigh thinks the current Hollywood mould of biopics are bad for acting, and she made her case over on SlashFilm. (/Film)

Devin Nunes is retiring from Congress to be the head of Donald Trump’s social media company? Lolololololol good luck with that. (Yahoo)

If you somehow haven’t heard by now Charlie Cox is officially coming back as Daredevil, and I’d probably bet on seeing him in Spider-Man: No Way Home. (CinemaBlend)

And another gem from Kayleigh:

💫 Henry Cavill says that Kal has saved his emotional and psychological bacon plenty of times 😍 pic.twitter.com/ioSCvwhiBn

John Mulaney is going on tour next year. (AV Club)

Because no one knows what the hell it means even after two years, “FX on Hulu” is being scrapped. (Variety)

Please join Cannonball Read in extending condolences to the family and friends of one of their own, Rachel Grace Sanchez, and a hearty f*ck you to cancer for taking her from the world. About reading Paul Kalanithi’s When Breath Becomes Air earlier this year Rachel said, "Sometimes you just have to jump into something you know will hurt and give it a big bear hug." About her dear friend, Cannonballer Sarah says in her lovely and touching eulogy, "The world was so vibrant and fun when Rachel was around." (Cannonball Read 13)

From Dustin: Watch our old friend Skitz and his wife get AGGRESSIVELY cheerful for the Christmas season:

← 'Succession' Episode 8 Recap: You're My Onion | The Wild Jussie Smollett Trial Is Like Something Out of a Stefon Sketch →