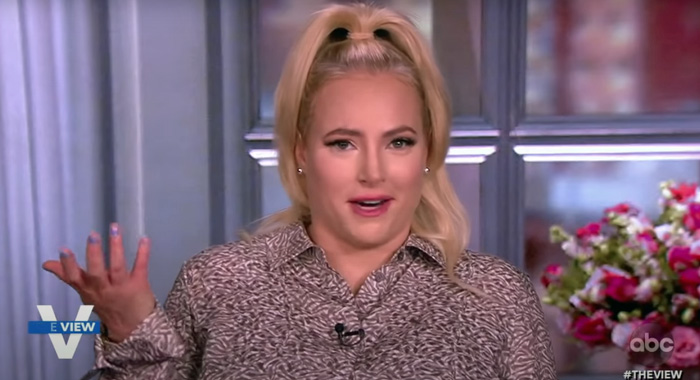 So Meghan McCain Really Wants to Bang Will Smith

Yesterday, Meghan McCain blasted the GOP for being a “sausagefest” that will face the consequences of debasing itself for “Cheeto Jesus.” Today, she announced on The View that Will Smith “can get it anytime he wants,” which is very unusual for Meghan. Normally, she makes a huge stink whenever the panel gets even remotely sexual, but for some reason, she really wanted the world to know that the Fresh Prince can stir her mayo jar any day of the week. I’m not trying to insinuate anything here — I totally am — but are things OK at home? Is Mr. John McCain’s Daughter not living up to his husbandly duties because he’s a piece of sh*t plagiarist who runs a piece of sh*t website? I’m here if you need to talk. (The Wrap)

do we need this same article every other week https://t.co/54zW1unrdy

South Carolina is bringing back the firing squad for executions because, sometimes, stereotypes about the South exist for a reason. (The Root)

Kayleigh shared this link to the “20 Worst Saturday Night Live Hosts,” and of course, Dustin chimed in: “Don’t disagree with the list, but also Tom Brady and, in terms of the worst show from a comedic standpoint, Jim Parsons a few years ago was just absolutely miserably bad.” (Rolling Stone)

Kaleena was “SCREAMING IN HER OFFICE” over the news that Ali Wong is set to star in Brian K. Vaughan’s Paper Girls for Amazon. (THR)

That Damn Michael Che wants to be the new Chappelle’s Show. Yeah OK, sure, buddy. Good luck with that. (Daily Beast)

Xoxoxoe got an urge to read Patricia Highsmith’s debut novel, the source for one of her favorite movies. "Ultimately Strangers on a Train is an interesting read, but I prefer how Alfred Hitchcock streamlined some of the action and themes and certainly brought his visual flair to Highsmith’s clever plot idea." Which movie do you think is better than the book? (Cannonball Read 13)

From Nicole: I simultaneously want to squish this and also run away screaming from it.

I am today years old when I found out sea bunnies exist. pic.twitter.com/F3kOQBPwW6