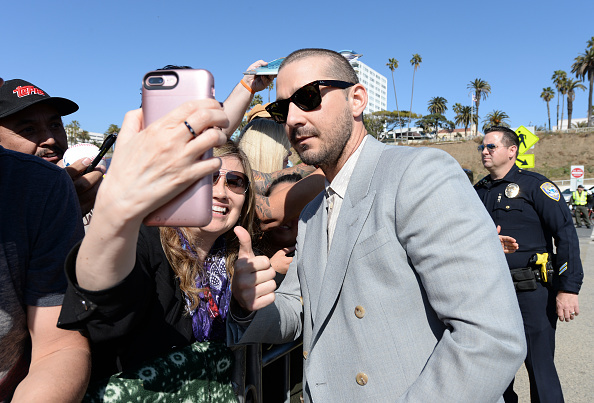 Ok, first: Demi Lovato in that orange dress on Harper’s is FABULOUS! Second: Tangled is better than Frozen, we’ve covered this, but Lilo and Stitch is better than most of the other Disney offerings. THIS IS NOT UP FOR DEBATE! - (Lainey)

I didn’t even realize that Shia LaBeouf had gotten married, but apparently, he married Mia Goth in 2016 and they divorced in 2018. LaBeouf has since dated FKA Twigs, but they split, and now Shia is taking walks with his ex-wife and her mother, which I think makes them pandemic official now. - (Just Jared)

I totally get that things are going to be very different from now on, I do. I get it. But if one of those things is that Heidi Montag is going to be a thing again, I reject this new reality. - (Celebitchy)

And Then It Hits You: Your Ex Is Quarantining With His New Girlfriend - (VF)

Continue to look for the helpers, look for the small kindnesses and thoughtful gestures where we can find them; they’re even more necessary and appreciated now. This FedEx driver is one of the helpers. - (The Root)

We talked about the United States Postal Service in last night’s PL, but guess what? We’re gonna’ talk about it again! That’s right, that’s how important it is. Here are some things you may not know about the USPS. - (MF)

Our Secretary of Education, folks. Jeezis. Thankfully, stupidity isn’t as contagious as COVID-19.

When you’re stuck in lockdown, it’s the perfect time to dig up the gorgeously tiled hot tub that was hidden under your house. What a find! - (BP)

Roxana went on the 2 Fast 2 Forever podcast to talk about Fast Five, the return of Sung Kang’s Han in the upcoming Fast 9, and why the franchise should make a pitstop in Iran, with its surprising bounty of antique American muscle cars. - (CageClub)

Awww! Kristy shared this in our Slack: “A “zonkey” is a real—and really adorable—thing!” - (People)

Quarantine Rand Paul looks like someone who is not trying to replace your dad but thinks your mom is a real special lady and would love to be your friend if you'd let him. pic.twitter.com/zWrT6SHiJj

AndtheIToldYouSos was listening to Killing Yourself to Live: 85% of a True Story when she was sent spinning on a snowy highway by a tractor-trailer. "While all of this was happening I was listening to entitled white dude Chuck Klosterman compare every woman he has ever kissed to people who had, at one time or another, been members of Kiss." She hated it. Do you have some least favorite reads? (Cannonball Read 12)

← 'Patches' by Dickey Lee is the Best/Worst Song You've Probably Never Heard | The President Halts Funding to WHO, Delays Stimulus Checks to Add His Name →