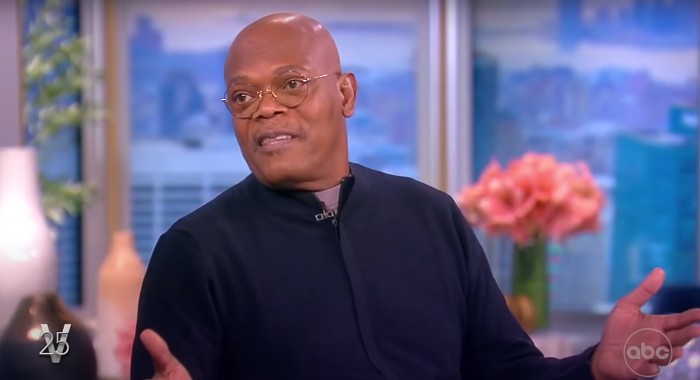 Samuel L. Jackson came out swinging for comic book films on The View, and he didn’t hold back his thoughts on the directors criticizing the genre. “It’s easy for them to dismiss it, only because people aren’t going to see their movies.” Damn. (The Wrap)

Grimes and Elon Musk secretly had another baby. (Dlisted)

Zoë Kravitz sets the record straight on the reports that she was too “urban” for The Dark Knight Rises, which did happen, but not like the headlines said. (Celebitchy)

In the newest issue of her newsletter, Kayleigh looks into the curious case of a 1996 Esquire profile for a celebrity who doesn’t exist. (The Gossip Reading Club)

From Dustin: Chris Pine and Thandwie Newton look like the leaders of the hottest cult on the planet. (Tom + Lorenzo)

Roxana shared this wild deep dive into the current state of Scholastic after the former CEO and patriarch died before he could adjust his will — or so the family says — essentially cutting out his own sons and leaving control of the company to his ex-girlfriend. (Vanity Fair)

From TK: Speaking of wild, WBNA superstar Brittney Griner is STILL being held without trial in Russia, and this article is a fascinating dive into why it’s not being made a bigger deal. Hint: Griner hits the trifecta of being a black, female, gay athlete. (Intelligencer)

And, also, from Kayleigh:

From James: If Ghislaine Maxwell’s convictions get thrown out because of this juror… (NPR)

The Parents Television Council is mad at Disney for… adding the Marvel Netflix shows to Disney+. Yup, that’s definitely the thing Disney is doing wrong right now. Nailed it. (Variety)

Another white person has been cast in Dune. (Deadline)

Malinda Lo’s National Book Award-winning Last Night at the Telegraph Club is the voters’ choice for Cannonball Read’s AAPI-themed Cannon Book Club (May 20-21). Faintingviolet explains how Cannon Book Club works and when you can join in on the discussion in her announcement post. Have you read this bestseller? (Cannonball Read 14)

now this is cinema pic.twitter.com/PAcVTgeeQ2