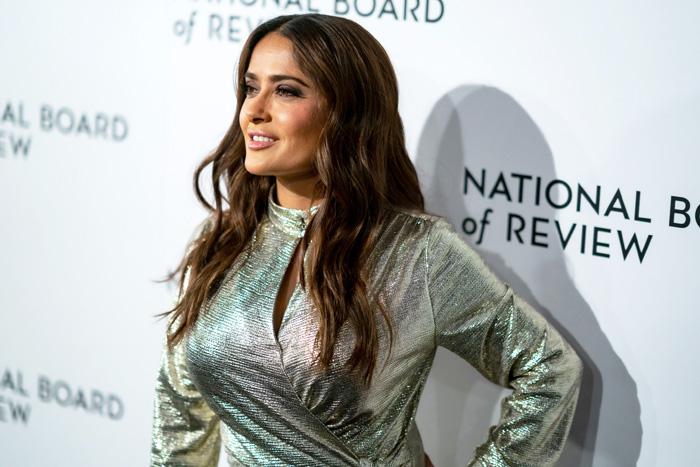 I’m going to try and handle this topic as maturely as possible because, ultimately, it’s about a woman’s journey through menopause, and I’ve long since retired from mining celebrity boobs for clicks. Not counting this post. Anyway, while stopping by Red Table Talk, Salma Hayek shot down accusations that her breasts are fake by revealing that, actually, the darn things won’t stop growing. — Is now a good time to mention I’ve never felt more alive? Nope? Shutting up. (PEOPLE)

Warren Buffet is wisely distancing himself from Bill Gates. (Celebitchy)

According to this report, Trump nearly died, was saved by a rare, experimental drug that pretty much nobody else got access to, and rather than being humbled, he doubled-down on a reckless approach that continued to cause hundreds of thousands to die. https://t.co/iXFFEtbxMr

In what is surely an unrelated event, Stephen Amell’s wife called him a diva during a TV festival panel just two days before he was kicked off of a flight for yelling at her. (Us Weekly)

From Kristy: Want to be the first to see Suicide Squad? Look to the Fantasia International Film Festival for your chance. (/Film)

Steven Spielberg’s deal with Netflix is apparently nowhere near the big deal everyone made it out to be. (Fast Company)

king shit, did not hesitate for one second pic.twitter.com/Q75lbRvMGO

It sure looks like Warner Bros. was not a fan of Zack Snyder commissioning a drawing of Batman going down on Catwoman because somebody hit his tweet with a DCMA. (Gizmodo)

Kfishgirl sometimes finds Robert Langdon, Dan Brown’s signature character, a little too knowing and competent. Inferno shakes up that formula when he "…wakes up not knowing what the heck has happened for the past 24 hours or so. I liked that." Do you like seeing long-running characters off their game? (Cannonball Read 13)

this is going to be what kills alan Moore https://t.co/9WYHLUhEoR

← 'Loki' Episode 3 Recap: Bisexual Loki, and Enchantress Sylvie | The CW Greenlit a 'Supernatural' Prequel, And Then It Got Messy →