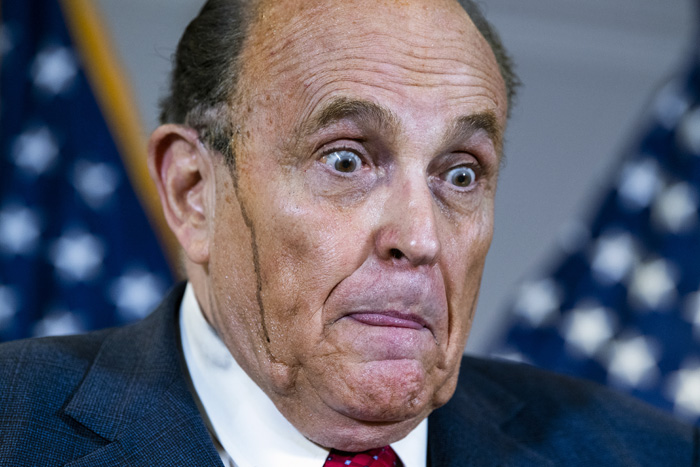 So I know the thing we’re not supposed to do is wish COVID on anybody, but I’d argue there’s a fine line between doing that and marveling at the fact that it took this long because hot f*cking Christ, Rudy. We’re talking about a guy who has been up Trump’s ass for months, has a son who tested positive right after the “Kraken” press conference, and has spent nearly every single one of his maniac hearings rubbing snot all over his face. If self-pleasuring Bat Boy here pulls through, scientists need to be combing his DNA for the antidote. (CNN)

That said, you’re going to have to excuse me if I don’t put my hat in hand and tilt my head down for pool ol’ Rudy catching the rona because just look at this goddamn asshole. Mike’s Sympathy Meter dipped way down into the negative, folks.

Rudy Giuliani on Wednesday, asking one of his witnesses: “Would you be comfortable taking your mask off some people can hear you?”

He was unmasked at the Michigan election hearing for over 4 hours pic.twitter.com/L8hh5wvMTD

Last week, Tara Reid slid into Nicole Kidman’s Instagram comments to pitch her a movie. Instead of leaning into the most headlines she’s had in a while, Tara is blaming her “social media team” for the comment. OK… (Dlisted)

While Donald Trump pretends he’s going to overturn the election, his staff is quietly preparing for him to move to Mar-a-Lago permanently. Or at least until he goes to jail. Fingers crossed. (Celebitchy)

New numbers from the CDC show that Black Americans and people of color are dying at higher rates from COVID-19 than is being reported. (The Root)

For Vulture, Roxana wrote about how David E. Kelley copied all the wrong things from Big Little Lies in his ultimately dissatisfying miniseries The Undoing. (Vulture)

From Dustin: Our old friend Daniel Carlson has still got it, as evidenced here in a very nice piece on how prescient Tom Cruise’s Minority Report was. (Plex)

AT&T CEO basically says the quiet part out loud about streaming release windows aren’t go back to how they were before the pandemic. (Deadline)

Letitia Wright deleted both her Twitter and Instagram accounts less than 24 hours after her anti-vaxxer with a side of transphobia fiasco. (Variety)

From Kayleigh: Following on from Romancing the Runoff, Mystery Loves Georgia brings together a group of crime, thriller and mystery writers in the name of raising money for the Georgia runoff election. You can bid on items such as a chance to be a named character in a new Lee Child book or exclusive signed novels by Atticka Locke, Sara Paretsky, and many more! (Mystery Loves Georgia)

Cookbooks are more than just books of recipes, they are also a cultural and historic record. When CoffeeShopReader was looking for a book to fill the Book Bingo UnCannon square she chose Toni Tipton-Martin’s The Jemima Code: Two Centuries of African American Cookbooks. "As the author points out, one of the key things about the book is that it really focuses on not just food and recipes associated with African American or Southern cultures; the focus is really on what the people themselves wrote and did." What are some alternative ways you like to consider history? (Cannonball Read 12)

This is called “Adam Driver orders his favorite drink at Starbucks.” pic.twitter.com/sLBjhEaqKj

← 5 Shows After Dark: 'Shameless' Season 11 premiere, 'A Holly Dolly Christmas' on CBS | Voting Democrat in the Georgia Runoffs Is the Easiest $1200 You Will Ever Make →