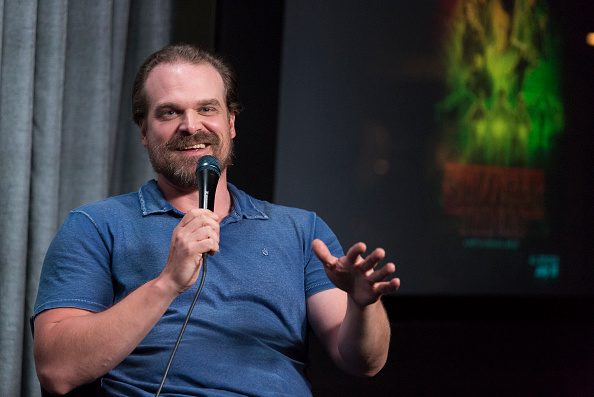 RIP Tom Holland's Hair (You Were Loved), Plus Did We Know Who David Harbour Was Dating?

This montage of Tom Holland’s hair, set to Sarah McLachlan’s “Angel,” is my favorite thing today. RIP, Tom’s hair. You were loved. You were so very loved. - (Lainey)

Dear god, how? Why? How and why does this keep happening and when will it stop? It’s sickening and our hearts go out to the family and friends of Atatiana Koquice Jefferson, who was murdered in her home by a police officer. - (The Root)

Amber Rose and A.E. had their baby. He has a very non-traditional name. - (Celebitchy)

Oh, so Matt Lauer’s friends are “completely appalled” by him NOW? Jesus. Welcome to the club, Matt’s friends. - (Dlisted)

You guys! Look! It’s Stevie (Emily Hampshire) from Schitt’s Creek all fancified for the Amfar Gala and she looks fantastic! - (GFY)

David Harbour and Lily Allen are dating. Did we know that? Is that weird? Normal? I don’t even know. (JustJared)

I’m Scary Dimp-eating Kimmy from Full House. What are you? - (Drunk J. Crew)

I just spent 45 minutes roasting a delicious spaghetti squash. Definitely more liquid than usual. Hey, why’s it not pulling apart into strands like spaghet— OH NO IT’S A MELON.

I cooked a damn melon. 😑 pic.twitter.com/hRFr33vaMP

Trump’s “impenetrable wall” is “impenetrable”… unless you’re an 8-year-old girl or a man juggling while climbing it, among others. - (The Independent)

There’s petty and there’s this. This is a whole different level of petty. - (BP)

This is fantastic! h/t Buellie1208

For 2 years I’ve been dreaming of a free shop where trans kids could dump the clothes of their former life and get restyled head to toe. Here’s what we collected in a week after putting it into the universe. And yesterday @transformcincy became a non profit! pic.twitter.com/TqmOWQzNpB

Noodlestein’s danger tits loves fantasy and romance but not together. The exception is Shelly Laurenston’s bonkers shifter romance Hot and Badgered, the first of a series about three sisters who shift into honey badgers. "The people in this story are nuts, and every time they hare off on some shenanigan, it makes you love them more." How likely are you to pick up a book about shape shifters? (Cannonball Read 11)