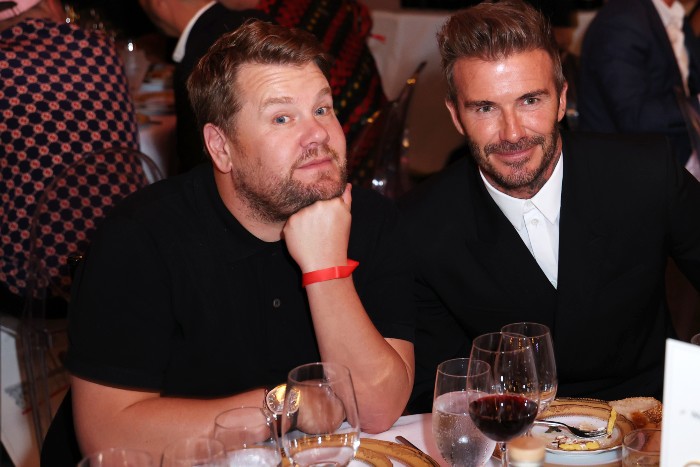 After James Corden was banned and unbanned from Balthazar following accusations of mistreating the staff, which he allegedly apologized for, restaurant owners in New York have been coming forward with tales of Corden visiting their establishments — and being an absolute delight to everyone? If the story about him putting on headphones and sleeping while his wife dealt with a crying baby on a plane turns out to be false, I don’t know what to believe anymore. (TMZ)

The Creed III trailer is a Grade A thirst trap. (Lainey Gossip)

John Waters will always remember the time he saw Angela Lansbury just chilling at a sex club, as one does. (Dlisted)

She Said is already making a point of ignoring producer Brad Pitt. (Celebitchy)

Patrick Stewart got turned away from a comedy show I was on bc it was full and instead of saying “excuse me I am Patrick Stewart” he was like “ok thanks” and went home https://t.co/f7g9M63slr

Billy Ray Cyrus might be engaged to a woman who’s younger than Miley Cyrus. Best of luck to all parties involved. (Jezebel)

And Howard Stern wants to know when the conservatorship starts. (Variety)

In case I haven’t said this enough, Werewolf by Night freaking owns.

of course Michael Giacchino instructing the Werewolf by Night animators to think of Man-Thing as if he was Jeff Bridges was my favorite part https://t.co/8587bnzh98 pic.twitter.com/HPlO56FnVl

People are still crazy for Hannibal. (The Wrap)

Today I learned America has oil tucked away in salt caves? (Gizmodo)

If you’ve read tiny_bookbot’s reviews, you probably know she is a literature professor who often reviews books she plans to teach. You probably don’t know how much she likes to make soup. "And to bring it back to books, I ordered a cookbook that might as well have been custom-made for me, by an Irish food writer: Rachel Allen’s Soup Broth Bread, and I cannot wait for it to arrive." Check out Quick Questions with a Cannonballer for more of her favorite things. What’s your favorite cookbook? (Cannonball Read 14)


← 'Slow Horses' Season 2 Trailer: The Best Worst Agents in British Intelligence Are Back | Liz Truss is Out as British PM After Less Than Two Months in Power →