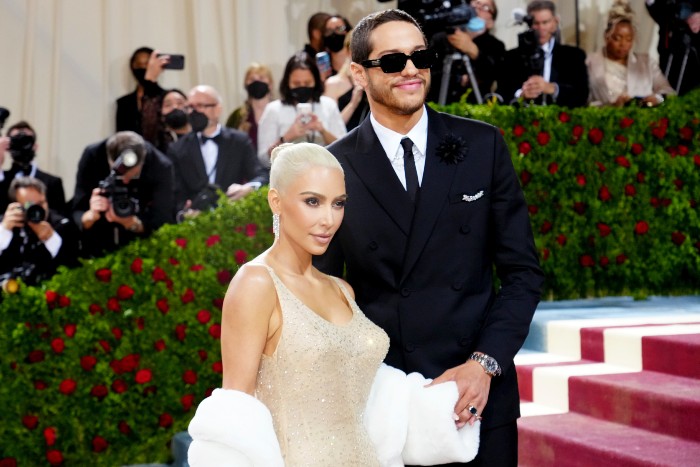 Pete Davidson Is Ready To Make Babies: The Kardsahian-ing Is Complete

Pete Davidson has officially reached that special moment in every Kardashian relationship where you started pumping babies in them or Kris Jenner haunts your dreams with finger knives. — It’s true. I dare her to sue. — In a new interview, Pete says he’s ready to have kids after spending time with North West. As for how Kanye will take this news, I assume Pete drives around in one of those Popemobiles now. If he doesn’t, he should start. (The Cut)

If Chris Pine is your Best Chris, or you have a thing for hot cult leaders, these photos of him in a silk robe are a gift. (Lainey Gossip)

Sebastian Stan stepped in some sh*t commenting on his Emmy nod. (Dlisted)

Halsey is auctioning off paintings to benefit abortion funds. (Celebitchy)

Daniel Kaluuya has confirmed that he’s not returning for Black Panther 2, a movie that is theoretically coming out this year. (Variety)

I loathe giving this clicks, but it’s important to point out how much of the Online/Dirtbag Left enjoy Trump because he’s a shitposting asshole just like them. Who cares that women don’t have control over their bodies anymore? The guy’s funny, man! (MEL Magazine)

Jamie Lee Curtis wants people to know she assumed Ana de Armas was an “unsophisticated” actress fresh off the boat from Cuba when they filmed Knives Out. (IndieWire)

Literary spats aren’t what they used to be…pic.twitter.com/10sc7kdDqu

Amber Heard has been denied a mistrial over the incorrect juror thing because her legal team didn’t bring it up until after the verdict. (People)

An absolutely fascinating interview with the subtitle team for Stranger Things 4 and their now legendary descriptor skills. (Vulture)

Auntadadoom gives 8 out of 5 stars to Janet Malcolm’s The Journalist and the Murderer, an exploration of the relationship between Jeffrey MacDonald and Joe McGinniss (Fatal Vision). "In writing this book, she herself is the journalist, and she personally grapples with the same fundamental issues…how to get information out of a source without lying to them." Do you think it’s ok for a journalist to lie to get information? (Cannonball Read 14)

Right wingers finding out they look like dorks is hilarious https://t.co/cBY5lNvlzU