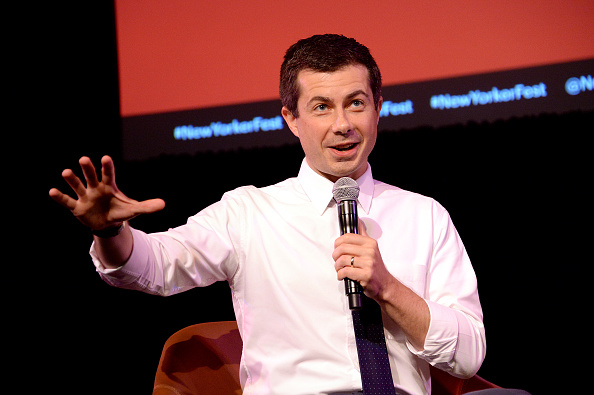 Pete Buttigieg Phoned the Journalist Who Called Him a 'Lying MF'; It Did Not Go Terribly

Madonna having a little sit-down and chatting with Lil Nas X during her concert is actually kind of cute. - (Lainey)

Why do kids hate it when their parents sing? It seems to be a fairly universal thing. Even Idina Menzel’s 10-year-old son doesn’t want her to sing in the car. - (Celebitchy)

I’m just as bummed as you are that there won’t be any Baby Yoda merch in time for Christmas. However, these Star Wars instant pots are almost as good, right? Ok, no, they’re not, but they’re still fun for the SW fan in your life, aren’t they? God, I suck at picking out presents. - (Romper)

A Party Down Reunion: Are We Having Fun Yet? - (Vulture)

Vogue asks Dan Levy 72 questions, and I grin like a goon the whole time. - (Vogue)

Yesterday, Michael Harriot had some very blunt words for Mayor Pete. Today, Buttigieg called Harriot to talk about it. - (The Root)

In Ford vs Ferrari, did you covet the GT40 MKII driven by Ken Miles? One of the two replicas built for the movie goes up for auction in 2020 and you can get your hands on automotive and cinematic history, signed by Ken Miles’s crew chief for the 1966 race, Charlie Agapiou, and Miles’s son, Peter Miles. - (Motorious)

This is an interesting headline. The article is also very interesting, but that headline is an attention-grabber. - (AVC)

Is the term “mansplaining” being thrown around so much that it’s lost its original meaning and its true “oomph!”? - (The Cut)

Kerri Russell is on the cover of this month’s Town & Country, and I’m digging her photoshoot with the big hair and deeply made-up eyes. - (GFY)

Debcapsfan has been enjoying Sherry Thomas’ Lady Sherlock series and just finished the 4th book, The Art of Theft. This one ends on a downer, leading up to the much-anticipated confrontation between Charlotte and Moriarty in the next book. Debcapsfan wants to know, "If you haven’t read the other books, what are you waiting for?" (Cannonball Read 11)

← Scarlett Johansson Says 'She Mishandled' 'Rub & Tug' Controversy | TikTok Is Harmless, Except That It's Not →