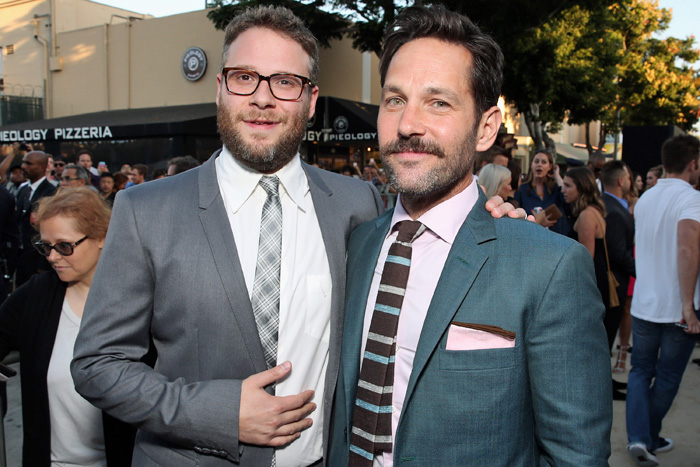 Paul Rudd Tried to Give Seth Rogen a Surprise Massage: It Backfired

Paul Rudd tried to prank Seth Rogen by pretending to be his masseuse, and it backfired in the best way possible. (Twitter)

Now Angelina Jolia might be dating The Weeknd. Why not? (Lainey Gossip)

Iggy Azalea denies she’s blackfishing in her new video, so I gotta ask. Does Iggy Azalea not know how YouTube work? Because we’re all looking right at the video, and lady… (Dlisted)

A California police officer played Taylor Swift’s “Blank Space” in an attempt to prevent a Black Lives Matter activist from uploading a video to YouTube — in the belief that the platform’s copyright-detection system would block it.

In the latest issue of the Gossip Reading Club, Kayleigh dives into the 2006 Vanity Fair profile of Tom Cruise and Katie Holmes’s newborn baby, Suri, and how strange the entire thing was. (Gossip Reading Club)

Then he posted a picture of himself with the head guy in charge of @Marvel's @MarvelStudios ( Kevin Feige.)

Like I said: What a fun coincidence. Nothing more to read into it. Let's all move along…

From Seth: For the next year, the Philly Inquirer will be doing a deep dive on many of the foundations of the US that have contributed (and still do) to systemic racism and inequality. (Inquirer)

From Dustin: A fascinating piece on a very real but rarely considered danger of the Internet: Link rot. (The Atlantic)

The fourth annual Book Bingo Reading Challenge has begun, and Cannonballers are already filling out their bingo cards. The card (it glows!) was beautifully designed by yesknopemaybe. ElCicco posted the first bingo review, an excellent review of Jane Austen’s Northanger Abbey, and vel veeter is filling out his card quickly. If you are looking for some summertime brain stimulation or encouragement to read, you can register for Cannonball Read and play Bingo. The Book Bingo Reading Challenge lasts until October 31. (Cannonball Read 13)

← 5 Shows After Dark: 'The Beast Must Die' Premiere AMC, 'When Sharks Attack' on National Geographic Channel | Stephen Dorff, Shut Up You Dummy →