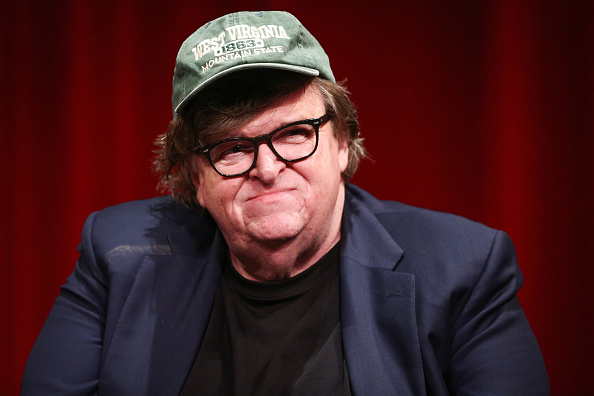 I’m not sure why I’m even linking to this except that when I was in high school, Drakkar Noir was the popular guy scent (and Polo). Even now, if I’m walking past a crowd of people, if I get a tiny whiff of Drakkar, it makes me smile. What were the main guy colognes when you were in school or what scent did an ex wear that if you smell it now, you still kind of drift off in your head for a second? - (Celebitchy)

Ok, while I’m reminiscing: About 20 years ago, I had an acquaintance who was a personal assistant in LA. She worked for Faye Dunaway on one movie and said it was the absolute worst job she’d ever had and she dreaded going to work every day because she never knew what insignificant error she would make that would get her literally SCREAMED at. Sounds like Ms. Dunaway has only gotten worse over the years. - (Dlisted)

Michael Moore has gained another few seconds of relevancy by attacking Robert Mueller and the faith that some put in him.

Michael Moore told Don Jr. that Mueller was going to take him away in chains… then claimed he told everyone not to put their faith in Mueller.

Oooooh, who will play Lori Loughlin in the Lifetime movie of the college admission scandal? I vote for Candace Cameron-Bure! - (AVC)

Prince Harry and Dr. Jane Goodall greeted each other like total animals! Kind of. It was adorable. - (Lainey)

So if you or a Twihard that you love is looking for a lovely Airbnb experience, today’s your lucky day! - (Popsugar)

Our Joanna, she’s “so beautiful, it hurts to look at” her.

GO NOW GO and check out this trailer for a new podcast project I’m doing with @kristinnoeline to celebrate the 25th anniversary of #MySoCalledLife AHHHHH. Then head to https://t.co/SBfatQP3YY for ALL the goodies we have to offer. pic.twitter.com/ueQImE9pQz

In yesterday’s PL, I linked to the post about the Black couple who went to Angry Orchard to drink, spend time with friends, oh and for a wedding proposal that was basically ruined by the overzealous, racist security guard who accused them of stealing a t-shirt. Update: The manager has been fired and the security team has been replaced. - (The Root)

Genny shared this and I thank her for it! “Check to see if Equifax owes you money for leaking your data:” - (ftc.gov)

Roxana wrote about the Sofia Coppola film Somewhere, and how the highest form of the American dream is to disappear. - (BWDR)

This alpaca lives in the suburbs and swims in his family's pool 😎 pic.twitter.com/QpCA1u6vVM

Forever 21 (Forever 21 is still in business? Huh.) sent out Atkins low-carb diet-type bars with their online orders and it didn’t go over well. - (Jezebel)

“All those moments will be lost in time, like tears in rain. Time to die.” Sadly, Rutger Hauer has passed on way too young. - (io9)

A former immigration defense attorney, LanierHgts wanted to help her pre-teen kids understand what’s happening at the US border and why people would undertake a dangerous journey with an uncertain end. She turned to Eoin Colfer and Andrew Donkin’s graphic YA novel, Illegal. Elie Wiesel’s quote, "How can a human being be illegal?" starts the book and was also the question LanierHgts frequently asked in court. Is there a quote that has been meaningful to your life? (Cannonball Read 11)