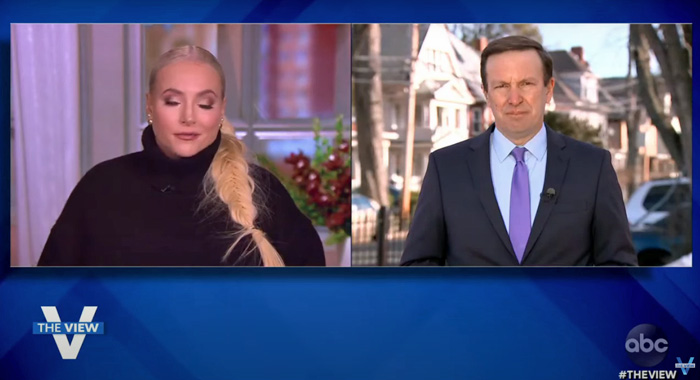 If there are two people besides Donald Trump who are responsible for Wednesday’s attack on the Capitol building it’s Ted Cruz and Josh Hawley. So, naturally, Meghan McCain went to bat for Hawley — who she thinks should run in 2024 — because two days after a goddamn coup is definitely the time to bitch and whine about “cancel culture” after he lost his book deal for being a seditious f*ckwagon. Fortunately, Chris Murphy and Joy Behar weren’t having it. On a personal note, am I glad to have her back? I was happy about the thought of it, but then once it actually happened, it was a total monkey paw situation. Clearly, the pandemic broke my brain. (The Daily Beast)

Millionaire Blake Shelton decided to sing a song about minimum wage during a time of rampant unemployment and loss of work. It went well for him. (Celebitchy)

Olivia Wilde wasn’t kidding when she said Shia LaBeouf violated her “no asshole” policy. Christ, what a dick. (THR)

Bridgerton star Regé-Jean Page has already rocketed up the list of contenders to be the next James Bond. (IndieWire)

OK, maybe I enjoyed her return a little bit. Just a tiny smidge…

She MY FATHER'd in the middle of a coup.

The middle of a coup. pic.twitter.com/RXsFPPR9zc

From Seth: With home cooking on the rise, the LA Times provides an interesting look at the mechanics of providing recipes through some updates to its own process. (LA Times)

From Roxana: Jennifer Freyd accused her father of sexual abuse. Her parents’ attempt to discredit her created a defense for countless sex offenders. (The Cut)

ASKReviews is keeping up her 2020 baking habits with an assist from Mary Berry’s Baking Bible. "I went through and marked with a post-it every recipe I want to try, and there are SO MANY. Easily 70% of the content." However, she takes a star off because not every recipe has a picture of the finished product. Do you think cookbooks should have a picture with every recipe? (Cannonball Read 13)

Catticus Finch (great name) starts her first Cannonball Read with Anna Lee Huber’s The Anatomist’s Wife. "The rather gruesome murder puts you into the story quickly, and while the narrator is clearly a woman, you have to wonder why she is familiar with corpses." Do you have a favorite historical mystery series? (Cannonball Read 13)

OMG IN WHITE HOUSE STATEMENT DON TELLS SUPPORTERS THEY CAN "PICK OUT A $29.99 LEGO SET" AT TARGET IF THEY "GO HOME" NOW !! pic.twitter.com/DVzNkh5uT9

← Transition Updates: Pelosi Contemplates Impeachment as Trumpism Burns Out | It's Been a Stressful Week, So Here: Have a Damn Fine Duck →