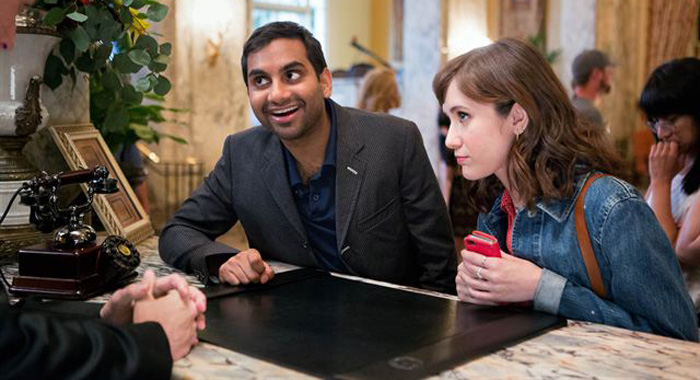 Wait, 'Master of None' Is Seriously Coming Back? OK...

The rumors are true. Aziz Ansari did make a third season of Master of None that will hit Netflix in May, but there will be one noticeable change that I guess is his way of ducking the #MeToo conversation? It’s all very weird. (IndieWire)

“Mike, what’s the best way to describe Evangelicals’ actions during the pandemic?” This. This right here:

She was just about to drop some CDC knowledge. Damn. pic.twitter.com/Bh9IF0iqI2

Angelina Jolie gets frank about the roles she’s been taking lately. (Celebitchy)

From Tori: Madonna’s daughter Lourdes is all grown up and dishing on her famous high school classmates… including “terrible DJ” Ansel Elgort, which is probably one of the nicest things anyone has said about him on this website. (Vanity Fair)

From Nicole: Welp, this adorable grandma got me right in the feels today:

back when i tested positive for CoVid, my depression/anxiety were really kicking my ass due to being isolated. my precious grandma danced outside my window almost everyday so i would feel loved. & now i watch this video every time i get sad to remind me that i’m never alone🥺 pic.twitter.com/x1PRpW1dyJ

Emilia Clarke wrote a comic book about a woman who, if I’m reading this right, gets random superpowers from her period? (EW)

In a similar vein, Whoopi Goldberg is writing a superhero film about an older Black woman because “they’re all saving the earth all the time.” Not that I’d ever tell Whoopi what to do, but if she wants to make the villain be a certain blonde heiress who dresses like your aunt’s love seat, I wouldn’t be mad about it. (Vulture)

We all have a once-favorite author we’ve outgrown. Esmemoria says in a recent review, "[t]hey offer a decent escape and they are fairly entertaining. I just think I’ve outgrown his style." Can you recommend a mystery writer esmemoria might pick up instead? (Cannonball Read 13)

Chimp has a reunion with the people that rescued him❤️❤️❤️ pic.twitter.com/vFaRYMW6P1


← Trailer Park: 'Werewolves Within,' 'New Order,' And More | Morning Briefing: Will Trump Get His Facebook Account Back? Plus, MTG vs. AOC(?), and Murkowski Bucks Mitch →