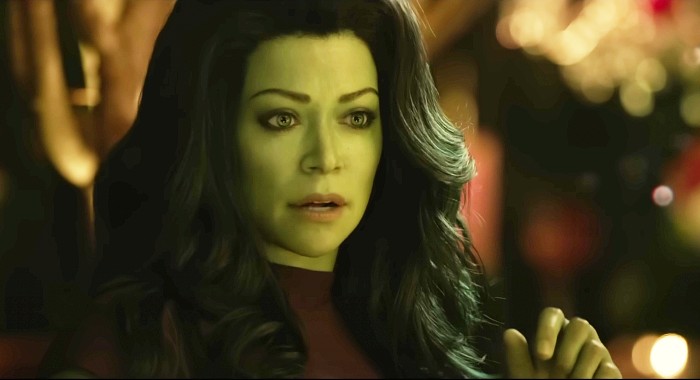 Marvel Is Reportedly Fixing the CGI in ‘She-Hulk’

After dropping the first trailer for She-Hulk: Attorney at Law, there was an immediate backlash over the quality of the CGI to the point where the words “The CGI” literally started to trend on Twitter. Apparently, Marvel noticed. The official website for the series reportedly has an updated version of the trailer, “which shows some subtle differences in the CGI work on She-Hulk’s face.” Considering Andor, which will be 12 freaking episodes long, drops two weeks later, it’s not like it will hurt to delay She-Hulk until it’s ready to go. Will Disney+ do that? Haha, no. But it should probably consider it. (Comic Book)

Simu Liu hosting the Time 100 Gala is another in a series of firsts. (Lainey Gossip)

Absolutely wild that Kim Kardashian is out here making a more impassioned plea for gun control than Matthew McConaughey. (Celebitchy)

From James: It figuratively kills me to offer the Yankees credit for anything, but I appreciate this a lot.

From Dustin, who seriously wants to know why action figures always look like they’re jerking off. As an avid consumer of collectible figurines, I couldn’t love him more for sharing this link. (MEL Magazine)

Amidst all the Star Wars and Indiana Jones news today, Lucasfilm also dropped the first teaser for the Willow series, which will apparently be the big holiday title for Disney+ thanks to The Mandalorian Season 3 slipping into February of next year. (Uproxx)

From Kayleigh: True to his word, Matt Patches is eating a shoe after promising 12 years ago that he would if Top Gun 2 ever happened. (YouTube)

From Jen: Happy Anniversary to Dracula. Wish I could be there for this!

🧛‍♀️ Today is the 125th anniversary of Bram Stoker's Dracula! Did you know that it was inspired by Whitby Abbey? 🧛‍♀️

To celebrate we are attempting to break the GUINNESS WORLD RECORD™ at Whitby Abbey for the largest gathering of people dressed as vampires. @GWR pic.twitter.com/pXnCAwHALI

Horizon Zero Dawn, an absolute banger of a game, is getting a live-action Netflix series. Hopefully, it will learn from the mistakes made by Halo. The many, many, many mistakes. (Gizmodo)

Damn, what the hell happens in the season premiere of Stranger Things 4 that it needed this kind of warning added to it? (Variety)

Natteringwpride ripped through Martha Wells’ Murderbot Diaries this year. The longer format of Network Effect gave her more time with her favorites. "The plots are just a framework for the fun and interesting character interactions." What do you suggest a Murderbot fan read next? (Cannonball Read 14)