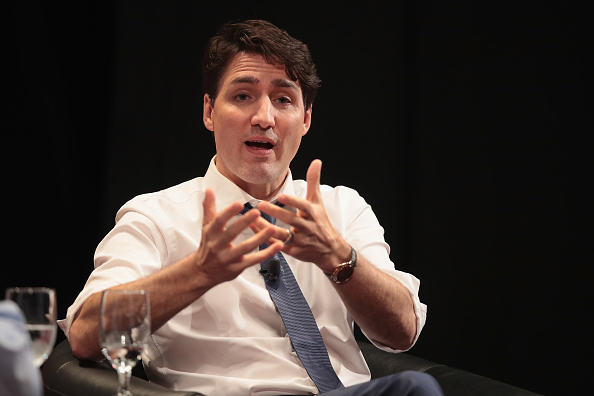 Damnit Justin Trudeau! What Were You Thinking?

TayTay finally tells her side of the Kanye EXTRAVAGANZA and calls him two-faced. - (Dlisted)

Somehow I manage to forget every year that People still does a Sexiest Man Alive thing. Maybe because it seems so antiquated, I don’t know. Regardless, they do it every year, and OtherLainey thinks they’re going for Keanu this year, but Maria thinks it’s gonna’ be someone else, someone more obvious. - (Lainey)

Olivia Colman is my queen. - (Celebitchy)

Lyanna Mormont is my other adorable, tiny queen.

'Kit called me 'dude!'' Bella Ramsey shares her journal entry from her first day on #GameofThrones and we can feel the hype 🐺🖤

I’ll bet growing up, this young woman never expected she’d earn a six-figure salary because of her tongue length… and there’d be no sex involved. - (The Cut)

Kayleigh shared this, “Christina Newland writes about the little-known story of Saundra Edwards, a rising star whose dreams were cut short when she killed her abusive husband.” - (Vice)

“Impostor syndrome is a common malady. Developing your emotional intelligence skills—which are so highly sought after by many organizations—can help you overcome it when it happens.” - (FC)

Heather calls these Richard Quinn looks the Rodarte of London Fashion Week and I could. not. agree. more. Egads! - (GFY)

This is not fashion. This is disgusting and cruel and treats school shooting victims and their families like a quick buck money-making scheme. - (The Root)

Jesus Christ, Justin Trudeau. WTF, dude? You can’t even blame this on the 1980s. He wore brownface in the goddamn 21st century. (Time)

Kate shared this in our Slack and it brought out some really strong words from a few of our other writers. Nico Tortorella does not come off looking great here. - (People)

This touching story of a man’s late-grandmother’s D&D journey is just so very lovely. - (BP)

Writer Nora McInerny has channeled all the complicated grief and joy of becoming a mother, losing a pregnancy, her father and husband both to cancer, falling in love again, and having another child into two books and a podcast, Terrible, Thanks For Asking. Carriejay likes the way she talks about going on with life after living through hard things in No Happy Endings. "For her there’s no such thing as ‘closure’. There’s just a mess of feelings and working through it and trying to be happy even when conflicted about it." What’s your best advice for getting through life’s hard knocks? (Cannonball Read 11)