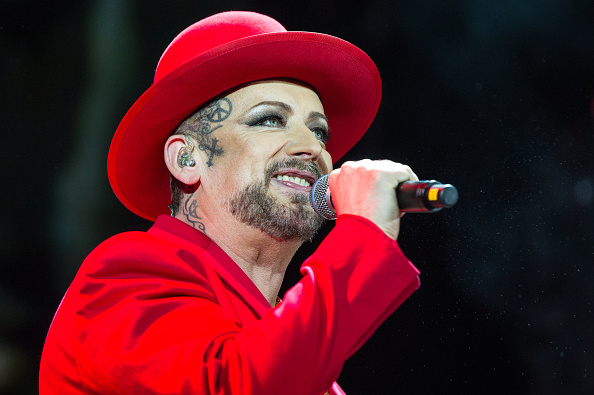 Just Remember, Boy George, Shutting Up Is Also an Option, and It's Totally Free!

Now I have this mental picture of MiMi being pulled in a little red wagon as Billy Eichner runs down the streets of NYC yelling at people. - (Lainey)

Katy Perry just turned 35 and to celebrate her birthday, she and 64 of her friends and family traveled through Egypt for 10 days. That sounds like a really fun birthday! - (Celebitchy)

If you thought Lady Gaga was done with acting after A Star Is Born, ha! No. She’s definitely not finished and will, in fact, be heading back to the big screen with a starring role in the Gucci murder movie. - (PW)

A racist racist at a Buffalo Wild Wings said something racist and the racist manager and host also acted racistly. Those racist employees are now unemployed racists. - (The Root)

A Nazi white supremacist would-be domestic terrorist was arrested on Friday and the details of his hatred and plans of destruction against a synagogue are sickening. - (Buzzfeed News)

Boy George, shhhhh. Just, shhhhhh. It is perfectly fine to say (or, in this case, Tweet) nothing. - (Dlisted)

The LACMA Gala was full of sparkle and glamour, and then some of the men were there wearing things. - (GFY)

I had this saved to share yesterday but I forgot it - sorry! Enormous skeletons erupted from a Mexican street during Día de los Muertos - (Colossal)

I don’t know why this wasn’t just sent directly to the AskPajiba Advice mailbox. “Is He Into Me or Is He Just Trying to Get Me to Vote For Bernie?” - (McSweeney’s)

Roxana was on the Middle Geeks podcast with fellow Pajiban @Mae Abdulbaki to discuss the Babak Anvari horror film Under the Shadow and how it’s a modern classic that fuses a chilling ghost story with astute commentary on Iranian domestic life. - (Nerds of Color)

In case you were wondering? Kate would not, with the original concept art for the Game of Thrones Night King.- (VF)

Microsoft Japan is definitely on to something here with the 4-day workweek experiment. Now if the US would get on board… - (BP)

Aquillia has introduced her husband, Aquillius, to the Poirot TV series but insisted he read some of Agatha Christie’s stories before he watched the adaptation. One of them was Appointment With Death, and he figured out the murderer long before she did on her first reading. "I am rather put out that Aquillius figured this one out like halfway through ‘because it made most sense for the themes in the story’. Who reads a mystery like that?!" Do you know Agatha Christie mainly from her books, or from their adaptations? (Cannonball Read 11)