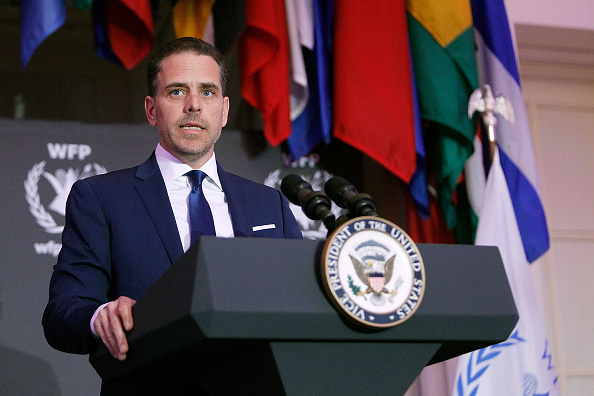 I love everything in this particular celeb social media round-up, but the picture of Donatella Versace, Courtney Love, and Elizabeth Taylor showing off her diamonds as she eats dinner might be my very favorite. - (Lainey)

I thought CBS’s HR department was the worst, but wow, they’ve got some real competition from NBC’s Human Resources department. - (Dlisted)

Lunden Roberts, the Arkansas woman Hunter Biden met at a strip club and subsequently impregnated, is now suing for child support and Hunter Biden is claiming he has no money with which to pay said child support, on account of spending all that Ukraine and China money on drugs, I guess. (Jezebel)

This weekend #IStandWithMelissa was trending on Twitter because of Melissa Benoist’s (the CW’s Supergirl) very courageous and powerful declaration about her abuse from her ex (Blake Jenner, *Allegedly*). - (TMS)

Kid Rock got all drunk and word-vomited a bunch of bullshit no one cares about because Kid Rock is irrelevant. - (Celebitchy)

All Trader Joe’s parking lots are hell. Yes, ALL of them. - (McSweeney’s)

Though Thanksgiving of 2016 seems like eons ago, do you remember when the white grandma mistakenly texted the young black teenager with the Thanksgiving dinner details? And he showed up? And everyone had a great time? Well, this is now an annual tradition and they gathered once again for the holiday! - (Scary Mommy)

E.T. came back for the holidays and he met Elliott’s family. Yes, it was a commercial but it still made my stupid heart glow. SHUT THE HELL UP! - (Nerdist)

In sad news, Shelley Morrison, best known for playing the character of Rosario on Will and Grace, has passed away. - (THR)

Many thanks to @RobertIger & everyone at @Disney for making this happen! Hope the Rowan Hospice patient not only enjoyed the film, but gets an extra-special satisfaction in knowing he saw it before I did. https://t.co/qpECeomcCX

This article about how to argue better might have been more useful before Thanksgiving, but no worries, some of us still have Christmas to contend with our families. - (Vox)

It’s kind of a silly, nothing special picture of Sophie Wessex, but there’s something about it I just really like. - (GFY)

JK Rowling’s Harry Potter series has inspired some great reviews from Cannonballers of the years. Narfna’s reread has inspired her to do a closer reading of the text in Harry Potter and the Half-Blood Prince. "Neville is a precious brave cinnamon roll who likes Charms and Herbology. He’s quiet but brave…It’s one of my favorite things about the series, how we just quietly trace his trajectory as the Almost Harry throughout the series." Who are your favorite Harry Potter characters? (Cannonball Read 11)

← 5 Shows After Dark: 'Holiday Gingerbread Showdown' on Food Network, 'Christmas Town' on Hallmark | Steve Bullock and Joe Sestak Drop Out of the Race for the Democratic Nomination →