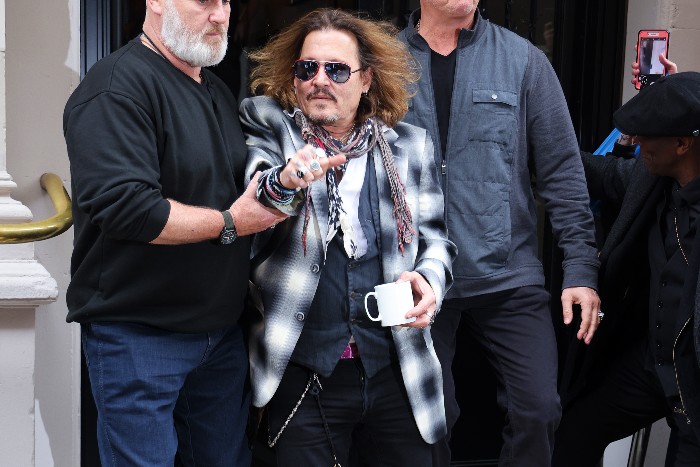 Despite being a sweet, innocent, angel of a man who would never hurt a fly and was clearly terrorized by that evil harlot Amber Heard, Johnny Depp has settled the lawsuit filed by Greg Brooks, the location manager for City of Lies who was allegedly assaulted by the actor while he was on one of his benders. Brooks was fired from the production because he refused to agree not to sue Depp, and it appears they reached an agreement instead of going through a humiliating trial. That’s reserved for shrill harpies, amirite, a shockingly high percentage of women from my high school graduating class? (THR)

Florence Pugh addresses the dudes who lost their minds because you could see her nipples through a dress. (Lainey Gossip)

Cameron Diaz is pretty sure she used to be a drug mule. (Dlisted)

Novak Djokovic is still unvaccinated, and apparently, his wife freaks out when people bring it up. (Celebitchy)

👀 Sneak a peek at the deepest & sharpest infrared image of the early universe ever taken — all in a day’s work for the Webb telescope. (Literally, capturing it took less than a day!) This is Webb’s first image released as we begin to #UnfoldTheUniverse: https://t.co/tlougFWg8B pic.twitter.com/Y7ebmQwT7j

Roxana spent 70 minutes with Jeremy Allen White, asking every question she could think of about his performance on The Bear. (Vulture)

Pete Davidson made his inevitable The Kardashians debut. (Rolling Stone)

What’s so good about a Superman gone bad? And, wait, is this article actually equating Black Adam with Homelander. Oh no… (Polygon)

the new yeezys look like a Great British Baking Show challenge gone terribly wrong, like lemon tarts that were meant to look like sneakers suddenly collapsed in the middle and they just brought this to the judging table and cried pic.twitter.com/ZQBlvB6QyR

Derek Jeter did not give his hookups gift bags full of sports memorabilia. My whole world is a lie. (Daily Beast)

Despite the meme stock explosion — which was not some populist revolt, but man, did Left Twitter gobble up that narrative like the easy marks that they are — GameStop continues to be hot garbage to its store employees. (Kotaku)

The Sarasota Herald-Tribute went ahead and quietly deleted that op-ed about how the Proud Boys aren’t so bad after everyone figured out the author is the wife of a Proud Boy. (Mediaite)

Elisamaza76 has been enjoying her Return to Romance™. She is reading books written in the last 15 years, because they are better on consent. "For the most part, few have asked me to read on-page sexual assault, much less believe that a character has enjoyed being assaulted and that their enjoyment excuses or negates the rapiness of the deed." Sadly, Laurann Dohner’s Mate Set gets zero stars for too much forced mating. Do you have paranormal series to recommend instead? (Cannonball Read 14)

Unless you've seen this before I promise you, you have no fucking idea how this ends. pic.twitter.com/oxsBbdKWXQ