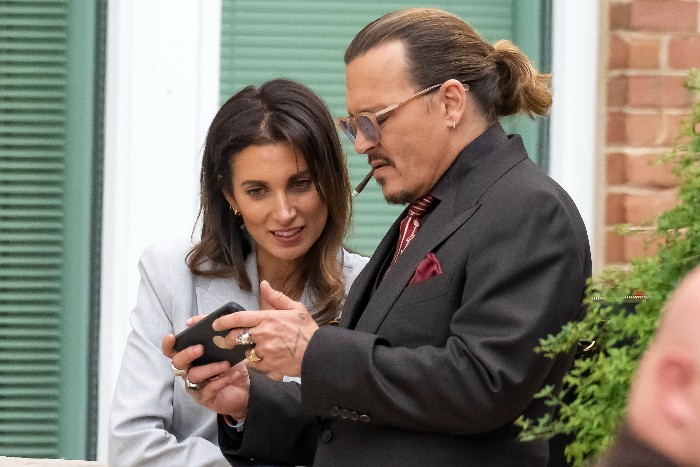 After months of speculation that Johnny Depp is dating his lawyer, it turns out he actually is. Except, weirdly, it’s not Camille Vasquez, who scored him a bullsh*t win in his defamation case against Amber Heard. Instead, Depp is dating Joelle Rich, the London lawyer who lost him his trial in the UK against The Sun. You know, the one where a court ruled that it’s perfectly fine to call him a “wife beater.” That one. (Page Six)

Kaley Cuoco roasts Pete Davidson for wearing a hoodie to the premiere of their new movie Meet Cute. (Celebitchy)

Jon Hamm gave up 60% of his salary to get Confess, Fletch finished. (Uproxx)

You can now buy the landmark from the hit Netflix show. But you'll have to steer clear of the Demogorgon. https://t.co/MkqrGGB0Li

A group of Louisiana public school students were told they were going to a career fair, but were instead taken to a church service where girls were told to forgive rapists and reject transgender identities and boys competed in push-up contests for money. https://t.co/FXY2AsK6Eb

Look out! It’s only the superstar @quintabrunson episode and it’s AMAZING!

Contains scenes of good, evil and something in between.

Subscribe, RT and please be excellent to each other.https://t.co/AoURibPnmAhttps://t.co/T4zLlUfB26#AbbottElementary pic.twitter.com/XpSm5xdgov

Here's the thing: if you are someone's *friend,* they don't actually ever have to hear from you about the ways in which you thought their play/book/film/etc sucked. You can stop at "I'm really happy for you" and if they're smart they won't ask what you thought lol https://t.co/dYJhdBCPwE

When you launch a genderless skincare company but name it using a French masculine noun https://t.co/gqb6VjWfV6

50 Cent really needs you to know he didn’t get his penis enlarged. (AV Club)

Your periodic reminder that Shaun King is not to be trusted and also which politician wrote the forward to his book again? I always forget. (Daily Beast)

Did you know some of the states trying to ban books are also trying to ban trans kids? To raise money for the Campaign for Southern Equality Trans Youth Emergency Fund, the good people at HEA for Trans Kids gathered books from Courtney Milan, Jackie Lau, Sussanah Nix and 11 others for the Tasty Treats Bundle. Emmalita read and reviewed all 13 books for Cannonball Read so that you’ll know what you’re getting. Donate by October 3. (Cannonball Read 14)