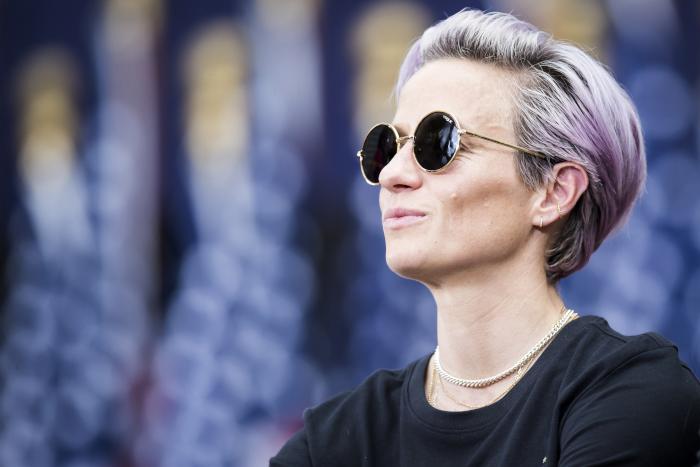 It's Megan Rapinoe's World, Ben Shapiro, And You're Just Living In It

Do you think Ben Shapiro played little league soccer, and was just an abysmal player, and seeing Megan Rapinoe is triggering quite the painful memories for him? Poor little monster. (Splinter)

Hat Trick! Yes, I am obsessed with her, and you get to enjoy the consequences of that. Have you seen Megan Rapione’s Sports Illustrated photos? SWEET JESUS ALL MIGHTY. I’m not sure which I love more: that wink or the Leeloo Multipass. (Twitter)

What did the US Men’s soccer team have to say about the pay inequality? I’m sure you’ll be shocked. (Deadspin)

Busy Philipps landed in Chicago and her first stop was at Au Cheval for a burger and that’s just right proper. (Lainey Gossip)

I’m currently reading The Overstory and thus I’ve become a bit obsessed with trees. I love this article about planting trees to fight climate change, this article about ‘botanical sexism’ and allergies, and this one about all the benefits that trees provide. (Curbed)

This is a fascinating read if computer geniuses and the evolution of life are your jam. (Nautilus)

Police in Kansas City caught an escaped criminal because of his farts. Yeah. That. (Dlisted)

TayTaySwifSwif says she has no regrets for speaking out against her former manager Scooter Braun, which is great! I wonder if she has any regrets for not speaking up about Trump and the election in 2016. (Celebitchy)

I used to be a long distance runner and then I switched over to bodybuilding cutting and bulking cycles, so I really appreciate this opinion piece about the extremes in the dieting and fitness world. It’s pretty f**king hard to try and find that equilibrium. (NYTimes)

Such an interesting read about the creator of 8chan. (Tortoise Media)

Do you remember that story about a kid who died, went to heaven, came back, and wrote a bestselling book? Surprise, surprise, it didn’t quite happen like that. (Slate)

I’m not sure about this cover shot of Ariana Grande, but I am sure that I love her quotes from the interview. (GFY)

BlackRaven unexpectedly came across the RASL series: The Drift, Romance at the Speed of Light, and The Fire of St. George. The Eisner Award-winning series by Jeff Smith, author and illustrator of Bone, fulfills the Award Winner square for Cannonball read’s Second Annual Book Bingo Reading Challenge. "I came away from book one nauseous and fevered for more. Book two was not as strong but did not disappoint. Book three has me scared out of my mind." Have you read any of Jeff Smith’s comics? (Cannonball Read 11)

I just love her so much. SO MUCH!

← What's Irina Shayk Saying by Not Saying Anything About Bradley Cooper (and Lady Gaga)? | Donald Trump's Social Media Summit Was a Embarrassing Sham →