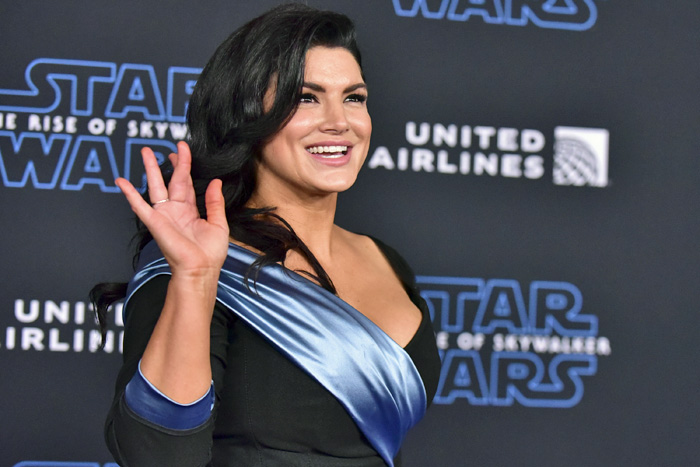 With John Boyega putting Star Wars on blast less than a week ago, the last thing the franchise needs is another controversy like, oh I dunno, Gina Carano going on a transphobic tear on Twitter. Probably not helping. (The Mary Sue)

Speaking of shooting yourself in the foot, tensions between Brad Pitt and Angelina Jolie are now back to 2016 divorce levels thanks to his little stunt in France. (Lainey Gossip)

Who the hell pays Lindsay Lohan upfront? Haha, why would you do that? (Celebitchy)

It's not going to be a Reichstag Fire at this point, just a Q drop telling the millions of people now living bodily among us bound up in a totally different reality that the Reichstag has burned

I want to say I’m surprised by this racist nonsense from a Pennsylvania diner, but I’m not. Not even a little bit. (The Root)

Warner Bros. really doesn’t want people to know how stupid it was to release Tenet in theaters, so it’s hiding the box office numbers now. (The AV Club)

From Roxana: The NFL is America, just not the way it wants to pretend. (Defector)

Maybe it’s just the pandemic or surviving our first week of cyber school, but this clip cracked me the hell up today.

My absolute favorite thing is late night shows hosting animal handlers and their weird dangerous animals in a tiny studio, and this bit with @ConanOBrien just *roasting* this very young and very unprepared animal huckster is so much damn fun. https://t.co/w6Y4UtfViZ

“The idea that it, specifically Q, doesn’t fit into a really clear broad political trajectory for the last 40 years is either willfully ignorant, or just damagingly naive about the role that politics has been playing in the United States.” (Religion Dispatches)

ABC News asked Sunny Hostin to edit out passages from her memoirs where she experienced racism on the set of The View. She told them to suck it. (Decider)

Debcapsfan has been trying to avoid reading sci-fi books by white guys, but Max Gladstone’s Empress of Forever and its badass heroine came so highly recommended she couldn’t resist. "I really loved that she’s faced with terrible and dangerous situations right off the bat." Who are your favorite badass women of science fiction? (Cannonball Read 12)

These ppl found a baby goat trapped in a pit. They took him home & cared for him overnite.

The next day they tried to find the owner but had no luck. While looking - they found a group of goats with the same white fur.