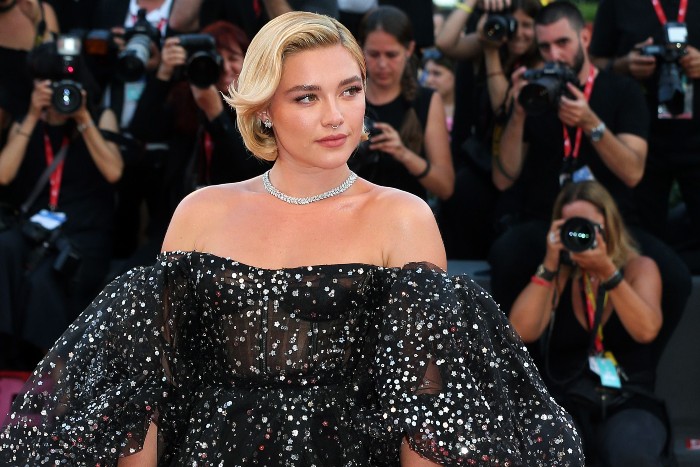 Oh dang, Florence Pugh actually showed up to the Venice premiere of Don’t Worry Darling, but she notably bailed on the press conference leaving Olivia Wilde to field questions about their feud and Shia LaBeouf. (People)

Jennifer Lopez’s latest issue of On The JLo details more of her wedding to Ben Affleck and reads like a romance novel. (Lainey Gossip)

Dominic Monaghan is still not over Evangeline Lilly cheating on him. (Dlisted)

Timothée Chalamet thinks “societal collapse is in the air” because of social media. After the weekend I had dealing with online brocialists, not seeing any lies here. (Celebitchy)

My gf and her friends have spent years trying to figure out what cartoon (glimpsed in the background of a family photo) is from. Dozens, maybe even hundreds of people have seen this image but nobody knows what it is from. If you recognize this man, please tell me. pic.twitter.com/nZibSf1QQH

i only care abt stuff like this from now on pic.twitter.com/AxvopVqAEu

From Seth: Mike Schur has been doing these stats of the day for the The Dan Le Batard Show that are a lot of fun, but this one about how fucking long Serena has been so good is really something.

Everyone please look at this seal that found a toy version of itself. pic.twitter.com/25VHmwjoi4

Ken Casey of the Dropkick Murphys goes on an epic rant against MAGA grifters with no lies detected and the Boston accent is the chefs kiss pic.twitter.com/jrFUFu3K67

apparently our dog has slowly cut a hole in our bedroom window shawshank style while we are out and has been letting herself out on the roof and just makes sure she’s back downstairs in her bed by the time we get home. only found out because our neighbor snapped this picture. pic.twitter.com/V1isknHXLa

Kanye West seriously needs help before he kills somebody. This stopped being funny a long time ago. (Jezebel)

Tiffany Haddish is suddenly very sorry that she participated in the sketch that’s getting her sued for child sexual abuse. A little late, lady. (THR)

After bleeding Netflix dry for The Gray Man, The Russo Brothers are reportedly pissing away a ton of Amazon’s money, too. (AV Club)

Booktrovert has been enjoying her first year as a Cannonballer, discovering new books, playing Bingo, and reading other Cannonballers’ reviews of books she’s reviewed. "Tracking my reading helped me to be more intentional about seeking out more diverse books, and many different types of reading communities, which I feel is like generating another huge spark for continuing to grow as a reader." How have you grown as a reader? (Cannonball Read 14)

From Andrew, who is clearly straight killing it with the LOTR content. (The new Amazon series is surprisingly good, by the way. I literally grabbed friends by the shoulders at a cookout and yelled, “I can’t believe how much it slaps!” before I even got drunk.)

With rings of power releasing here's a reminder of what were missing by not having Matt Berry as young Gandalf pic.twitter.com/a572t1qOS9