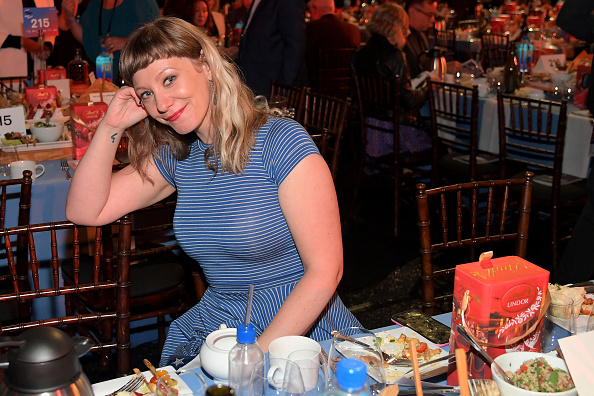 The power of MiMi is strong this time of year. Her “All I Want for Christmas Is You” is #1 on the Hot 100 25 years after it was released, everyone she and Billy Eichner talked to on Billy on the Street recognized her (that’s not always the case), and listen to the entire NYC subway station singing her song - that’s Christmas magic! - (Lainey)

We already knew that Melania Trump’s “anti-bullying campaign” was bullshit, right? Well, if you thought maybe she’d stick up for 16-year-old Greta Thunberg when her husband Tweeted insults at her, oh, gosh, that’s cute. - (Celebitchy)

The sweetness in the picture of Luna Legend shyly hiding under a chair as she meets her idol Misty Copeland is just too much. - (The Root)

If you saw earlier that Kumail Nanjiani is now jacked and you’re concerned that he may turn into another Pratt, fear not, lovelies! “We spent the majority of this past weekend playing Borderlands 3 so don’t think he’s changed too much,” Emily Gordon reports. Thank God! (JustJared)

Ok, so you remember that cringey Andrew Lincoln/Keira Knightley signs scene in Love Actually? OK, but what if it was for a cat? - (PS)

If you ever watched Chelsea Lately, you surely remember Chuy Bravo, Chelsea’s “nugget” sidekick. Chuy passed away this weekend at the age of 63. - (Dlisted)

How have I lived nearly 50 years without knowing this? I feel like I must have missed a day in Geometry class…

I turn 50 in a couple of months and I just want to wear the comfiest clothes I can find at all times. Diddy turned 50 and celebrated by getting all dressed up and having a fancy party with fancy people. I mean, both are probably just as good. - (GFY)

As a fellow slouching hobgoblin, I feel like I could benefit from this device. Or not. It does seem much easier to just keep slouching forward until I become a rounded little toadstool. - (MEL)

Are you listening to enough podcasts? Do you need another one? How about a (not so) true crime spoof Xmas podcast you didn’t know you needed? Two podcasts hosts. One dead grandma. All the reindeer cows you can handle. Unsolved Death Murder Crimes - (Apple)

This. THIS. this. Thiiiiiiiiiiiiis. This. College isn’t for everyone and THAT’S OK! - (Scary Mommy)

Kate shared this, “This is the content the internet was created for” - (GQ)

Bothari43 doesn’t want you to know much going in to Adrien Tchaikovsky’s Children of Time, except that it’s good. It’s better than good. You should know that some of the best characters are spiders. "I have now NOT killed multiple spiders in my house, and have been naming them all Portia. Great characters, great writing, amazingly original." Do you have an amazingly original sci-fi book to recommend? (Cannonball Read 11)