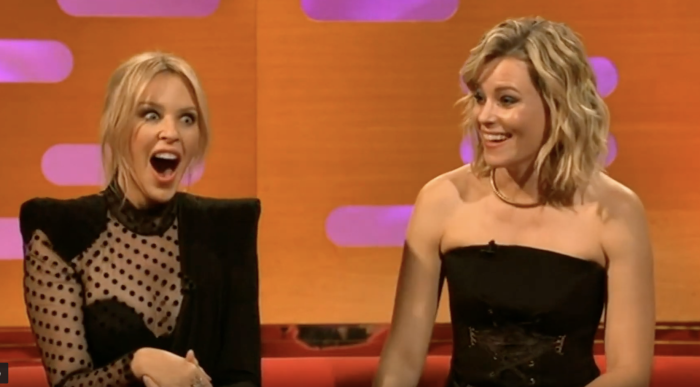 I don’t know why this made me laugh, but Mick Fleetwood looks like he has not a goddamn clue who or what a David Beckham is! Stevie Nicks looks like she can’t wait to just go lie down, Beckham be damned. Christine McVie looks like she’s having fun, though. - (Lainey)

Hey, so if you like Beck’s music but felt squicky about it because of the whole $cientology thing, you don’t have to worry about that anymore, I guess. - (Celebitchy)

Elizabeth Banks was on The Graham Norton Show, and while her movie, Charlie’s Angels might have bombed, her Prince Andrew joke certainly didn’t. If the embed below gets pulled, watch at (The Independent)

One of R. Kelly’s live-in girlfriends has apparently flipped and is telling her side of life with Robert. I sincerely hope, for her sake, that she finally sees Kelly for what he is and that this isn’t some way to get money for him. - (Dlisted)

This is going above and beyond the Hippocratic Oath, doctor. Wow, what a wonderful and good man and how lucky for this passenger that this doctor was on this flight! - (Yahoo)

I shared the earlier HONY post of Madame Tanqueray last week and of course there was more — she was far too fascinating to only get one blurb. Her story has gone viral since and we can only hope she gets a book or movie deal. She seems to have lived quite a life and tells a hell of a story!

Roxana shared this and it is so gorgeous! - (The Mind Circle)

Poor “Emma.” She just wants to talk about last night’s The Voice, eat her Lean Cuisine at lunch, and get this last binder finished without the copy machine jamming. - (AVC)

How to live like 89-year-old Grandma Gladys for a day. - (Buzzfeed)

If you have Disney+ you may have seen the Pixar SparkShort called “Float.” In January, Pixar will release another autism-themed short called “Loop,” which will feature a non-verbal, autistic girl. - (The Mighty)

Want to see some of the winners and contestants of the 2019 Beard and Mustache Championship? Of course you do! - (BP)

Cannonball Read has a small, dedicated band of volunteers who help keep it functioning and growing. This year the volunteers are putting together a CBR11 Gift Guide to help you choose books during this gift-giving season. Mrs Smith recommends Jeanette Winterson’s Frankissstein, reviewed by vel veeter. "It’s wonky and odd at times, and there’s almost zero anchor to the world, so the prose flits around in space, mirroring in some ways the anti-corporeality the novel discusses throughout." Do you have a speculative fiction lover in your life? (Cannonball Read 11)

I LOVE BEAR SO MUCH!

← 5 Shows After Dark: '2019 American Music Awards' on ABC, 'Watchmen' on HBO | We Live in Two Americas, and Neither Is Willing to Listen to the Other →