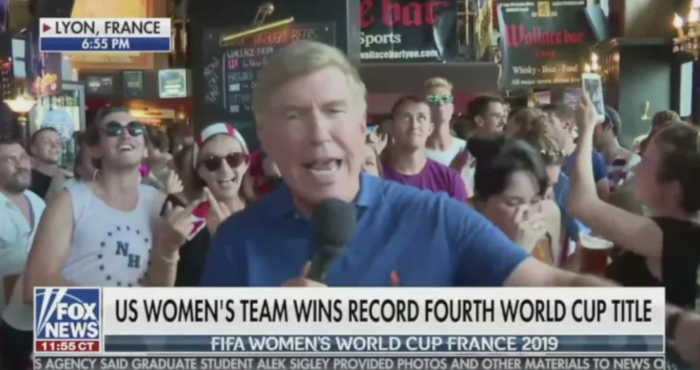 It’s not easy to go back to work after a long weekend, so let’s start off easy with looking at the lovely Lisa Bonet and Jason Momoa, shall we? - (Lainey)

The US Women’s Soccer Team kicked ass and brought home the Women’s World Cup, but it would be super great if they could also get paid what they’re worth, dontcha’ think? - (Refinery 29)

lmao @FoxNews just went live from a bar in France after the #USWNT win and people started shouting "Fuck Trump" on air😂😂 pic.twitter.com/EFstJx43BV

After the above clip aired on Fox News, President Trump went off on the network, which may or may not be related.

Watching @FoxNews weekend anchors is worse than watching low ratings Fake News @CNN, or Lyin’ Brian Williams (remember when he totally fabricated a War Story trying to make himself into a hero, & got fired. A very dishonest journalist!) and the crew of degenerate……

…..Comcast (NBC/MSNBC) Trump haters, who do whatever Brian & Steve tell them to do. Like CNN, NBC is also way down in the ratings. But @FoxNews, who failed in getting the very BORING Dem debates, is now loading up with Democrats & even using Fake unsourced @nytimes as….

…a “source” of information (ask the Times what they paid for the Boston Globe, & what they sold it for (lost 1.5 Billion Dollars), or their old headquarters building disaster, or their unfunded liability? @FoxNews is changing fast, but they forgot the people who got them there!

OK, so I’m not gonna’ lie, when I first heard about the KFC Cheetos Sandwich, it sounded positively revolting. Buuuuuuuuut, now I kind of want one. - (IB)

Sometimes you just need to watch Maru try to squeeze through small spaces.

Oh, so that bottle cap challenge? It’s over now. Mariah hit it with a high note and now it’s done, man. - (Buzzfeed)

A Black Lady Sketch Show debuts in less than a month on HBO and if you’ve been missing Ashley Nicole Black from Full Frontal with Samantha Bee, you can catch her here, along with Issa Rae, Robin Thede, and other writers and quite a guest roster. - (Shadow and Act)

Duchess Meghan and her buddies attended Wimbledon to watch Serena Williams play. Meghan wore jeans, so I’m sure half of Britain lost their damn minds about the “lack of class” compared to when Kate attended. - (Celebitchy)

Baby Archie was christened over the weekend and there were many fetching frocks and hats. We really need to get the hat thing going in America again. They’re so festive! - (GFY)

I have two office cats, but my office is in my home, so it’s not exactly the same as this company that adopted two kittens for their office. HIJINKS ENSUED! - (BP)

Sometimes you’re running through the airport and the escalator down takes forEVER. When in Singapore, why not just take the slide? - (BB)

Melanir moved Stuart Turton’s The 7½ Deaths of Evelyn Hardcastle way up her TBR list after a good review from a fellow Cannonballer. "Essentially the book is Agatha Christie by way of Black Mirror and Groundhog Day." Despite the recommendation, she wasn’t sure she would finish it when at the 20% mark she hit a problem. Eventually her curiosity and that good review convinced her to finish the book. What will make you quit even a well-recommended book? (Cannonball Read 11)

Poor Ralph buddy! The fireworks are over for this year. You can relax now.