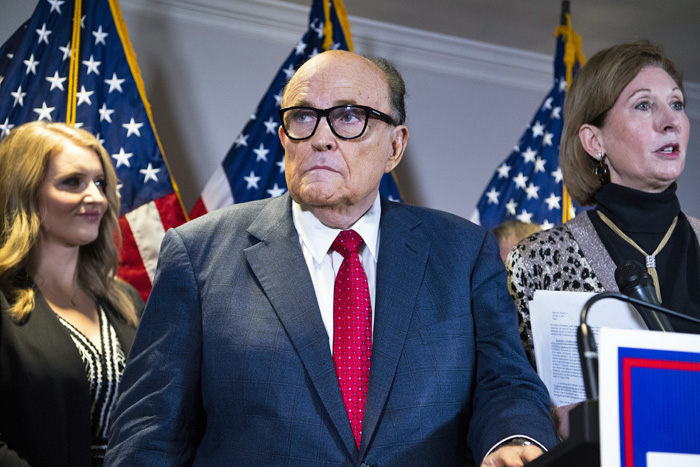 A Dominion Employee Just Sued the Trump Campaign and Its Cabal of Idiots, Life Is Good

A Dominion Voting Systems employee has sued Donald Trump’s campaign, Rudy Giuliani, the Kraken Lady, Chanel Rion, Michelle Malkin, and probably a whole bunch of morons I’m leaving out. And, yes, this is related to Fox News and Newsmax shitting their pants and denouncing their claims of election fraud. Merry Christmas! (NPR)

The more repellent Hugh Grant thinks he is, the more Lainey loves him. (Lainey Gossip)

Allison Janney said “yes I’ll do a Property Bros episode, but only if I can play it like Jessica Rabbit suggesting a throuple” pic.twitter.com/Ush9gp1Ctq

Kim Kardashian should do this and only this forever. (Celebitchy)

From Kristy: Elle’s controversial profile on Martin Shkreli’s ex-girlfriend Christie Smythe glossed over the Pharma Bro’s harrassment of female reporters. This one shines a light on it. (The Cut)

the more i stalk him the more i like him pic.twitter.com/8udiqtrv5i

I had this Patrick Willems video on “What’s the Point of R-Rated Superheroes?” saved for a few weeks, and only just got around to watching it last night. Very good shit. (YouTube)

By the end of The Invisible Life of Addie LaRue by V. E. Schwab, Dome’Loki was crying from emotion. The book explores what it means to be able to leave your mark on the world. "How does that affect a person when others immediately forget your existence, you can’t say your own name, or even write down a single word?" What book has had an impact on you emotionally? (Cannonball Read 12)

The end of this tiktok is maybe the hardest I've ever laughed pic.twitter.com/XhDowMP7lT

← 'His Dark Materials' is Getting a Season 3 for Some Reason | Oh, So Now He Decides to 'Govern' →