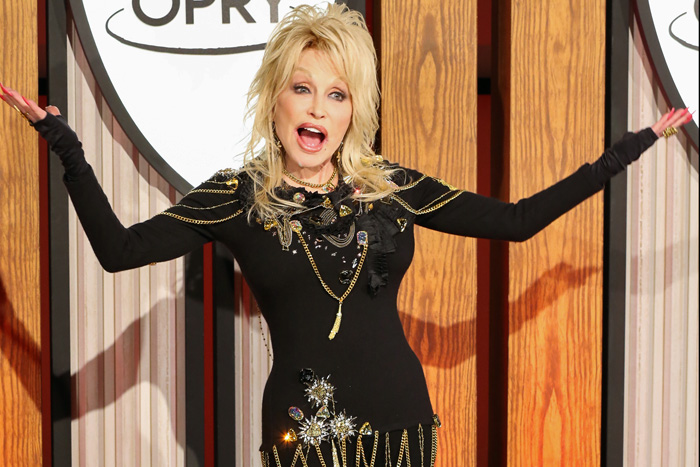 Dolly Parton Is Very Close to Living Out Her 'Playboy' Dream

Now that she’s out here saving the world from COVID, Dolly Parton has a chance at fulfilling her dream of posing for Playboy for her 75th birthday. GIVE. THE. NATIONAL. TREASURE. WHATEVER. SHE. WANTS. (TMZ)

How the hell is Tila Tequila trying to lure children into her house to “baptize” them not considered kidnapping? WTF? (Dlisted)

What I’m learning from The Crown is that, when not wearing gowns, Princess Diana dressed like a child who murdered their parents. pic.twitter.com/gIbxUrxgcX

You know how there have been rumors for years that Trump used the N-word while filming Celebrity Apprentice? Holly Robinson Peete is now confirming it was aimed at her. (Daily Beast)

Jessica looks back at 2001’s The Wedding Planner premiere. (Go Fug Yourself)

My old writing partner — and soul mate if I’m being frank — Carmen Ribecca took our almost daily anger at mouth-breathing MAGA family members and Facebook friends and channeled it into this spot-on piece of satire. (How Pants Work)

David Fincher calls Joker a “betrayal of the mentally ill,” which is definitely one way of saying “honking piece of shit.” (IndieWire)

Isaiah Washington calls out Katherine Heigl over an old Grey’s Anatomy beef except it sure sounds like Katherine Heigl may have been in the right here? And I don’t say that lightly. (PEOPLE)

Quick Questions with a Cannonballer interviews always have interesting tips and tidbits. Bea Pants has been listening to a lot of podcasts during the pandemic and particularly recommends Reading Glasses. LittlePlat recommends the Murray Whelan series by Shane Maloney as the most representative of her hometown of Melbourne, Australia. "They’re a set of crime novels set in the eighties where the protagonist is not a cop or a detective but a political fixer for the Australian Labor Party, and they display the character of Melbourne very well." Do you have a favorite book or book podcast about your hometown to recommend? (Cannonball Read 12)

When u ask DMX to name every woman jery dated on the show pic.twitter.com/O65f9TaYkm

← 5 Shows After Dark: ' Big Sky' Premiere ABC, 'An Hour with President Obama' on BET | Democracy Holds Again, But Only By a String →