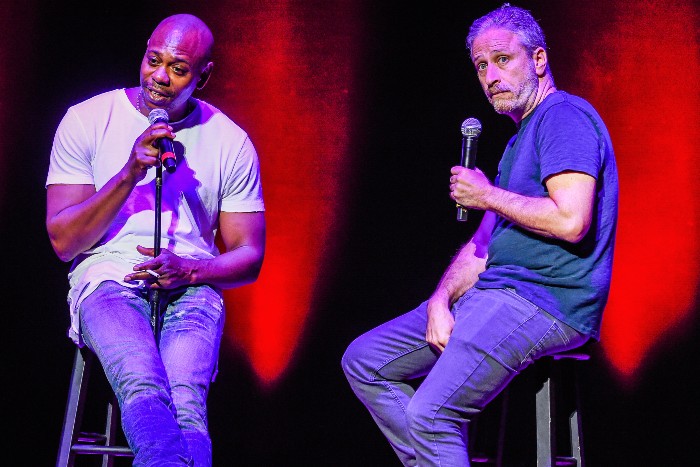 Shortly before news hit that Dave Chappelle’s attacker will not be facing felony charges, TMZ obtained audio of the comedian where he bragged about how he “felt good” that his friends broke his arm. “How bad does a n***** have to be that Jon Stewart would stomp him!” Chappelle said. This audio seemingly confirmed reports that Busta Rhymes, Jamie Foxx, and now Stewart roughed up Chappelle’s attacker, but the comedian’s rep has since claimed that Chappelle was only joking about the backstage beatdown. That very well could be the case, or it could be a whole lot of ass-covering because we all saw that dude’s arm was not bent in a natural way. (TMZ)

Chris Evans and Ana de Armas got close while filming their new action rom-com, a genre that Lainey would like to see more of. (Lainey Gossip)

Lady Gaga arrives in a flying dress to the #TopGunMaverick premiere pic.twitter.com/YAMjiWIEoz

For Slashfilm, Kayleigh wrote about The Evil Dead and the censorship battle it faced in the UK. (/Film)

From Roxana: What did the Moon Knight finale mean for Egyptian archaeologist and adventurer Layla? I chatted with May Calamawy about her character arc, the “revolutionary” feeling of working with fellow Egyptians on an MCU project, and Layla’s love of marshmallows. (Vulture)

From Lainey: If you need a bit of sweetness, this might help. *Sniff*, I miss my grandma - we used to have the best pizza and movie nights! (Ruin My Week)

From James: Grover Underwood and Annabeth Chase have been cast for the Percy Jackson and the Olympians series on Disney+. (Rick Riordan)

i understand skepticism, i was skeptical until recently too. but this wonderful article by @antifamouss made me realize how deep the misinformation campaign really goes. I am so appalledhttps://t.co/PAuPu2E8zX

Well, this melted my brain. Heath Ledger was originally supposed to star in No Country For Old Men, but he dropped out because he needed a break from acting. (AV Club)

Bungie defends abortion rights even as jackasses urge it to stick to games. (Kotaku)

The AAPI-themed Cannon Book Club discussion of Malinda Lo’s Last Night at the Telegraph Club kicks off on May 20th. AndtheIToldYouSos points out a universal experience in her review on Cannonball Read. "Lily’s friends and family are frequently on her case about the dangers of the world…but they are willfully naïve of the real and present dangers of grown men leering (and more) at young women." Are you getting ready for the discussion of this award-winning novel? (Cannonball Read 14)

I look so much like Channing Tatum women scream his name during sex https://t.co/XBbtmLRP3s pic.twitter.com/ejEQl54z71