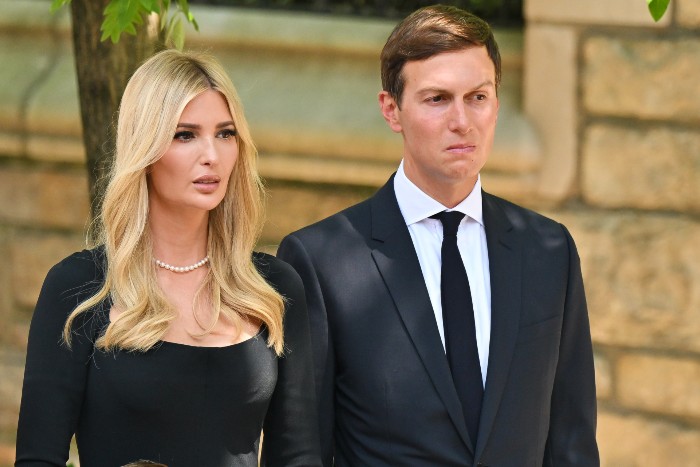 Did Jared Kushner Rat Out Trump? One Family Member Has Suspicions

While Mark Meadows and the Secret Service have emerged as potential informants for the Mar-a-Lago “raid,” Mary Trump doesn’t think there’s enough scrutiny over Jared Kushner possibly needing someone to give the Feds to smooth over his infamous $2 billion Saudi deal. Also, Trump clearly wants to bang Jared’s wife. We can’t ignore the elephant in the room anymore, folks. America’s counting on us. (Insider)

Maybe Michelle Yeoh can save the Russos from themselves as she joins their next Netflix movie, The Electric State. (Lainey Gossip)

Millie Bobby Brown was once told during an audition that she’s “too mature” to make it as a child star. (Dlisted)

Ben Affleck was freaked out by all the paps on his Paris honeymoon with Jennifer Lopez. Bro, this ain’t your first rodeo. (Celebitchy)

Teen Vogue's EIC @versharma spoke with #MsMarvel's exec producer @MiniB622 about what it was like getting Marvel Studios to bring the tragic partition of India and Pakistan to life onscreen ⤵️ https://t.co/3Wf5kNo5YL

Hey guys, I know a guy crashed into a US Capitol barricade today, fired a gun/set his car on fire/killed himself. Yesterday armed deplorables threatened the Phoenix FBI HQ. And a few days ago a guy attacked the Cincy FBI Building. But a Dem just said "fuck," so be on the lookout

Cool! This Woman Taught Herself To Fart When People Ask Her When She's Going to Have Kids: https://t.co/g10SQeFZry pic.twitter.com/5S48dnoysa

“I’m sure he’s loaded to the hilt. Do you know who his wife is? Lauren Boebert. She’s loaded. They all have guns,” one neighbor told a 911 dispatcher. “He just got chest to chest, face to face, looking to fight.” https://t.co/nakr9bwzZ0

Genuinely massive L for all of us who were cynical about earnest Blue Wave posters thinking life was a spy thriller.

Mark Ruffalo just did a drive-by on Star Wars. (Gizmodo)

From Kayleigh: Sohla and Ham are the power couple we deserve. (YouTube)

The Prey creature designer went through 20 concepts before landing on the perfect Predator, and yes, I’m still talking about this whip-ass movie. (Variety)

Scootsa1000 wants you to know that she hated Stacy Willingham’s A Flicker in the Dark, and you should not bother reading it. "This book is full of TELLING not SHOWING. And it made me crazy." Which books do you want to save other readers from? (Cannonball Read 14)