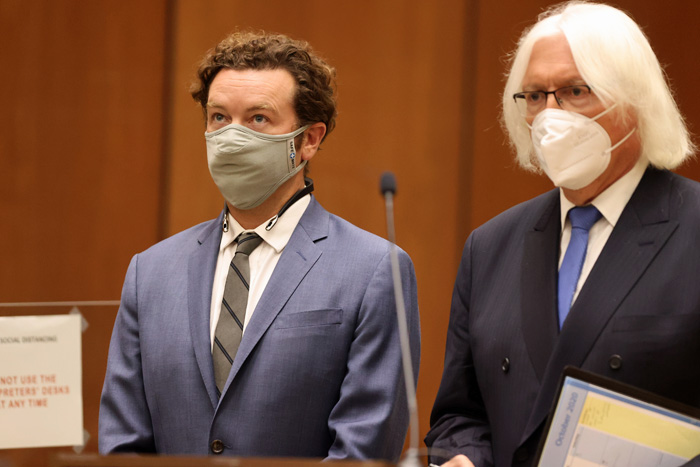 Call me old-fashioned, but if I’m on trial for multiple sexual assaults, I’m probably not going to take a smiling selfie in the court parking lot and post it to Instagram. Danny Masterson, on the other hand, has no such qualms. (Dlisted)

In related news, Masterson’s best friend, who still parties with him, and Mila Kunis are bragging about their “sustainable farmhouse” or some shit. (Lainey Gossip)

Dominic West is sweating what Lily James might say about him. (Celebitchy)

Ladies and gentlemen, I am SO very excited to present to you the June cover of @MensHealthMag, featuring its first-ever East Asian cover model.

You know it’s a big deal because I gave up boba for weeks for this shoot… WEEKS! pic.twitter.com/8oCEsBwcUf

From Kristy: Confused about the Demi Lovato news? The brilliant S.E. Fleenor breaks down the facts, language, and long history of being nonbinary. (The Independent)

From Steven: So… turns out that this brood of cicadas is having an epidemic of sexually transmitted fungus that makes their butt fall off and takes over their sex drive to make them f*ck nonstop to spread the fungus. Nature is healing. (NPR)

And from Kristy again: Each year, Pajiba covers the funky and fabulous features of the Fantasia International Film Festival. The first wave for this year’s festival has dropped, and it’s full of tantalizing offerings. (Filmmaker Magazine)

From James: Every parent in the world understands why the hijacker got off the bus:

A South Carolina man hijacked a school bus at gunpoint to try to get a ride to his house, a town over. He gave up and got off the bus about four miles in when the kindergarteners on board wouldn't stop asking him questions https://t.co/4zC6io0AFC

Stacey Abrams still has her eyes set on the White House. (The Root)

Fresh off of directing Miss Marvel, the Bad Boys for Life filmmakers have officially signed on to direct Batgirl for HBO Max. (THR)

Seinfeld writer/director Larry Charles says Kramer would be a “believer in QAnon,” so that’s enough internet for today. — Get it? Because of the meme? I’m not old. You are! (Daily Beast)

TheShitWizard thinks British comedian Michael Pennington’s Becoming Johnny Vegas is the best autobiography she’s ever read. She says, "the introspection and self-reflection here goes deeper than in any other celebrity autobiography I’ve ever read, as Pennington (Vegas’ real name) tries to get to the bottom of just how he became Johnny Vegas." Has a celebrity surprised you with their autobiography? (Cannonball Read 13)

My move at Dave & Buster's when I know your girl is watching pic.twitter.com/I8kSPFeh90