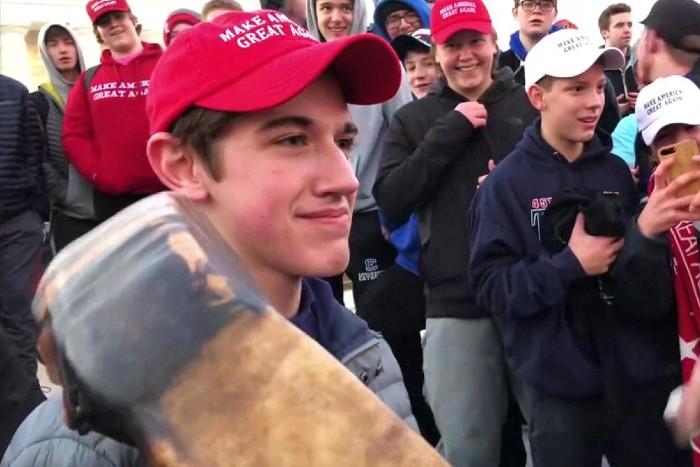 This Little Turd Did Not ‘Destroy’ the Media After All

Despite right-wing fart-goblins loudly declaring that Covington Catholic High School student Nick Sandmann would make the liberal media “pay” for showing him wearing a MAGA hat while smirking at a Native American activist, all of his remaining lawsuits were dismissed by a federal judge today. Not exactly a “slam dunk.” (Law & Crime)

While Ben Affleck galavants in Paris, Jennifer Garner is “getting quite close” with her burger boyfriend. (Dlisted)

Bear Grylls hates raw vegetables because they didn’t help him get over a bout of COVID. They’re dead to him now. (Celebitchy)

From Roxana: 100 years of Norman Lear, with an array of lovely memories about the TV icon. (Vulture)

From James: Fantastic comic artist David Mack is raising money for a women’s shelter and treatment center that was burglarized by auctioning off a gorgeous Sandman print. Folks can also donate directly to the shelter. (Facebook)

No, Stranger Things did not go back and edit the first season to make Jonathan less of a perv despite what a British GQ article that’s been trending all day on Twitter says. (Deadline)

Elon Musk wanted to buy Twitter. — Or did he? (Esquire)

So much of today’s Online/Dirtbag Left was birthed by Glenn Greenwald. While some have rightfully turned on The Intercept founder because it’s cool to dunk on him now, very few are grappling with how easy it was for their maker to hop right across the horseshoe. Just straight into Tucker Carlson’s and now Alex Jones’ laps. (Mediaite)

GTA VI will be more “culturally sensitive” by letting players drive over hookers and pedestrians as a Latina woman. I swear this isn’t an Onion article. (Kotaku)

After teaching Irish poetry and drama, tiny_bookbot decided this summer she needed to read more Irish fiction written in the last 100 years. First up is John McGahern’s character study of a bitter former soldier, Amongst Women. "McGahern cannily sets up the novel so as to explain but never excuse Moran’s behavior." Do you have a favorite novel by an Irish writer? (Cannonball Read 14)

Baby's got the Bens pic.twitter.com/sbDhx0fxpr

← Game Design is Dead; 'FBoy Island' Lives On | Joe Manchin Agrees to the Bare Minimum Ahead of a Possible Recession →