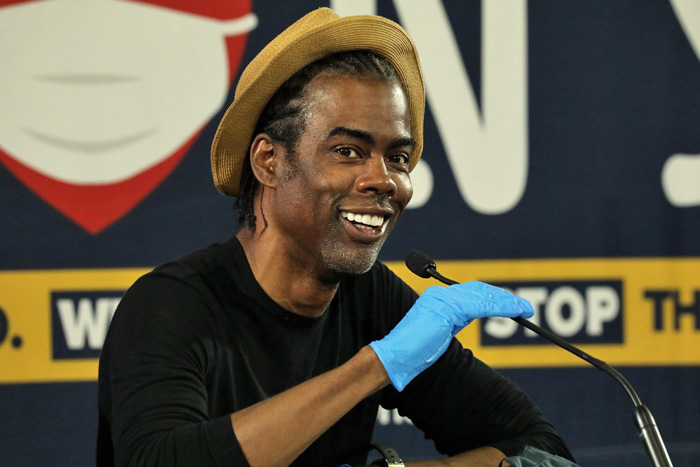 Chris Rock almost played George Constanza on Seinfeld and auditioned for one of the male leads in Friends. F*cking wild. (Lainey Gossip)

Brian Littrell joined Parler and the other Backstreet Boys aren’t having it. (Dlisted)

Ivanka Trump is not attending Biden’s inauguration now, so just assume the Secret Service pooped in her house and she’s too busy burning it down. (Celebitchy)

The asshole who brought the Confederate Flag into the Capitol building during Trump’s bullshit coup has been arrested. (The Root)

Roxana is taking over Vulture’s Twitter Friday night for their Friday Night Movie Club. 20 years later, let’s be surprised together by how much of the dialogue (and how many of the dance moves?) we still remember from Save the Last Dance (Vulture)

From Steven: Everyone on the internet is hating this but I think it looks amazing, and I say that both as a doctor, and as someone of whom there is no photographic evidence of the goatee I grew sophomore year of college. (Sad and Useless)

Good Christ, this video is damning. If anyone is still asking how the insurrection at the Capitol happened, just show them this video. There will be zero doubts unless they’re willfully obtuse morons, which is how we got here, isn’t it?

Today, we salute the Heroes of the Insurrection. pic.twitter.com/Dq5ijwGF0O

Tessa Thompson launched her own production company and scored a first-look deal at HBO Max right out of the gate. (Deadline)

Rest in Peace, Joanne Rogers, and thank you for spending your golden years calling out Trump. (CNN)

And, no, Tom Cruise didn’t bring COVID-19 robots to the set of Mission: Impossible 7. He’s still a batshit Space Jesus though. (/Film)

Do you wonder which of your fellow Pajibans are Cannonballers? Are there some books you are excited to read and review this year? Cannonball Read’s first diversion of the year is up with an invitation to introduce yourself, talk about books, and ask questions (Cannonball Read 13)

I’ve severely dropped the ball on adorable pet content so far that’s in an alternate dimension, so please, enjoy this small pup hugging a goose.

Because you want to see a puppy doggy hugging a goose. pic.twitter.com/V9VQWaK08b

← Review: 'Promising Young Woman' Tackles A Taboo Revenge Fantasy In A Fittingly 2020 Way | Transition Updates: D.C. Police Officer on the Rioters: 'Thank You, But F**k You' →