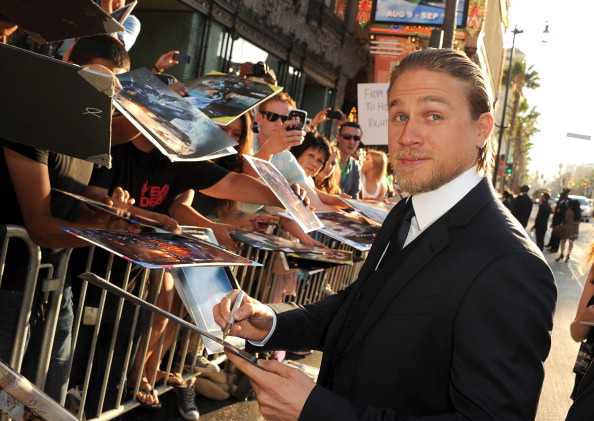 Anna Faris is Engaged, While Charlie Hunnam Sounds Like a Dick About Marriage

Vanessa Hudgens and Austin Butler have split after 9 years together, so it just makes sense that Vanessa wore a knock-out, over-the-top wedding-esque dress to the Bad Boys for Life premiere. You look good, girl! - (Lainey)

Anna Faris is engaged. I didn’t even know she was dating someone. - (Dlisted)

Charlie Hunnam and his girlfriend have been together for 14ish years. She very much would like to get married, he doesn’t want to, but he’d do it “because it’s important to her.” He kind of sounds like a dick when he says it, but I also get where he’s coming from; some people just don’t feel the need to make things official, others do. - (Celebitchy)

I can’t write a better blurb, so I’ll just copy theirs: Man Requests Katana-based “Trial by Combat” to Settle Dispute with Ex-Wife and her Attorney - (AVC)

Well, the thing is, she’s too busy to make cookies because she’s trying to keep your youngest from getting gunned down in school by your organization, the NRA. https://t.co/lYEeucEfAp

In sad news, Hall of Fame wrestler Rocky Johnson, father of Dwayne “The Rock”, has passed away. - (THR)

Individually these flavors are good. Combined they sound revolting. - (TIB)

Oprah mostly lives in California now (despite her years in Chicago), so I don’t think she remembers what cold feels like. It’s funny because it’s true! - (Lainey)

Olay’s Make Space For Women Campaign Is Pure Female Empowerment (and it features Busy Phillips - I love her!) - (Elite Daily)

Roxana and Pajiba alum Jason Bailey were quoted in this NBC News piece about this year’s Oscar nominations and the snubbing of so many movies directed and made by women. - (NBC)

When kella came across The Goldfinch by Donna Tartt she was intrigued by the "Winner of the Pulitzer Prize" seal on the cover. She wondered if there would be some quality that sets this award-winning book apart from a best-seller. As she read, she found she could tell the difference. "Tartt’s ability to paint a picture with her descriptions is other-worldly." Do awards make a difference to you when you are selecting a book? (CannonballRead 12)

I agree with Huck!