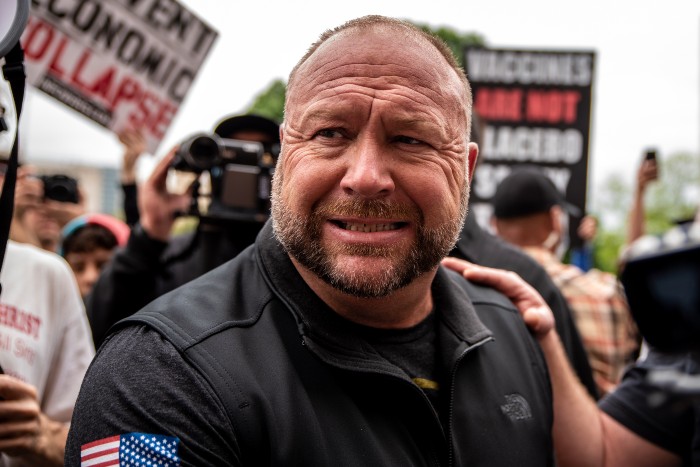 Alex Jones Is ‘Basically Broke for the Rest of His Life’

If you haven’t heard the rapturous news by now, Alex Jones just got absolutely wrecked in court and is now on the hook for just shy of a billion dollars to the Sandy Hook families. While there will no doubt be some legal maneuvering to try and lower that number, former U.S. Attorney Harry Litman said, “I just don’t see how he winds up anything but basically broke now for the rest of his life.” Music to my frickin’ ears. (Variety)

Kim Kardashian is footing the bill for private security at her kids’ school because of Kanye’s latest sh*t show. (Celebitchy)

Is there a nicer way to say ‘shit for brains’ because I’m struggling here pic.twitter.com/d3AYpovJa8

We are devastated about the passing of our beloved American Idol family member, Willie Spence. He was a true talent who lit up every room he entered and will be deeply missed. We send our condolences to his loved ones. pic.twitter.com/QWrWqf7qQN

Kid Cudi hit me up about learning how to skate. I’ve given him two lessons so far and it has been gratifying to see his commitment to the process. Rarely do beginners take direction so well or progress as quickly. And he’s taken some slams, only to get back up like a true skater: https://t.co/hgTrXfNN4b

If you use Google Chrome’s Incognito Mode, you might want to sit down and/or presumably zip up. (Gizmodo)

Joe Manganiello is directing a Dungeons & Dragons documentary. (The Wrap)

Contrary to reports, Cartoon Network is not dead. (Polygon)

After a recommendation from Maintenance Phase podcast, AnnaCollier found some dated opinions in Food Politics about "obesity," but good research about how the food industry shapes what we eat. "[Marion] Nestle is an academic, but the book is written in an engaging style and doesn’t require an extensive academic background to understand." Which books do you recommend even though they are a mixed bag? (Cannonball Read 14)

Shout-out to the original Targaryens pic.twitter.com/hSZ6ygMZN7