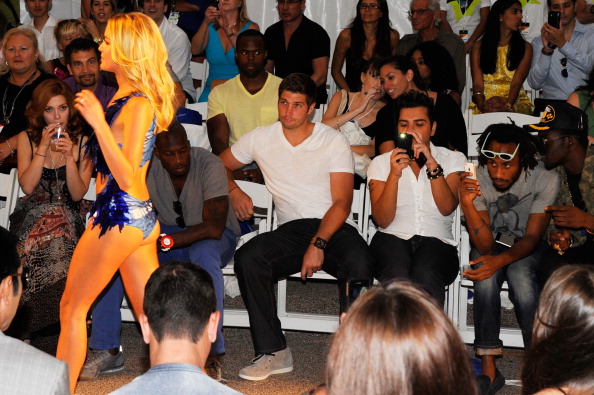 Gisele is doing a “supermodel for a day camp” (as Maria called it) prize for her All In Challenge and it’s a really good one. I’d love a “having drinks and making ice cream” with Martha Stewart All In Challenge. - (Lainey)

Speaking of Martha, I’ve said before that I don’t Instagram, but if I did, I would absolutely follow Martha Stewart. Look at those beautiful and colorful daffodils! Where else are you going to see ‘dils that color? (yes, probably many places - shhhh!) - (T&C)

Phoebe Waller-Bridge has a wall of penises in her house. You know, as one does… (Also, probably NSFW, but who even knows what is and isn’t SFW in this new reality, but it’s a literal wall of dicks, so it’s probably still NSFW in any reality - unless your work is p*rn, then maybe? I don’t know. I’m not your supervisor.) - (DListed)

Jesse Eisenberg, his wife, and three-year-old son have spent the lockdown in Indiana, helping to fundraise for a women’s shelter. - (Celebitchy)

After a decade together, Kristin Cavallari and Smokin’ Jay Cutler are divorcing, and let’s be honest, a decade is a quite a feat in the reality show world. From what I understand, however, the header image above is their marriage in a nutshell: She’s working it, and he’s, like, staring at an imaginary scoreboard.

With great sadness, after 10 years together we have come to a loving conclusion to get a divorce. We have nothing but love and respect for one another and are deeply grateful for the years shared, memories made, and the children we are so proud of. This is just the situation of two people growing apart. We ask everyone to respect our privacy as we navigate this difficult time within our family.

This Is Not The Apocalypse You Were Looking For - (Wired)

If you’re going to wear a homemade mask, you can choose so many different kinds of fabric, colors, or patterns. Wearing a Confederate flag mask is a purposeful choice. - (The Root)

Confused about the rules of this pandemic? This should clear everything up. - (BoingBoing)

Not all heroes wear capes. - (CBC)

Little Prince Louis is two years old! And cute as a bug! - (GFY)

Kate shared this in our Slack: “Come for the headline, stay for the excellent article” - (CNN)

Dr. Steven shared this: “So you woke up today and thought “what I really need is a story that involves sex toys AND nuclear disarmament” - (Twitter)

Jodi brought us this: “The best thing to come out of the ‘Tiger King’ phenomena has to be this cover of “Here Kitty Kitty” by The Offspring.” - (Reddit)

After a friend recommended Nnedi Okorafor, MarkAbbadon picked up The Book of the Phoenix. He found it challenging and engaging. "When I said this is a dense and complicated novel, I do not mean it is difficult to read, in fact quite the contrary." Have you recently found a favorite new author? (Cannonball Read 12)

← 5 Shows After Dark: 'Penny Dreadful: City of Angels' Premiere Showtime, 'Homeland' Series finale | Social Distancing Works! But It's Much Easier in Some Places Than Others →