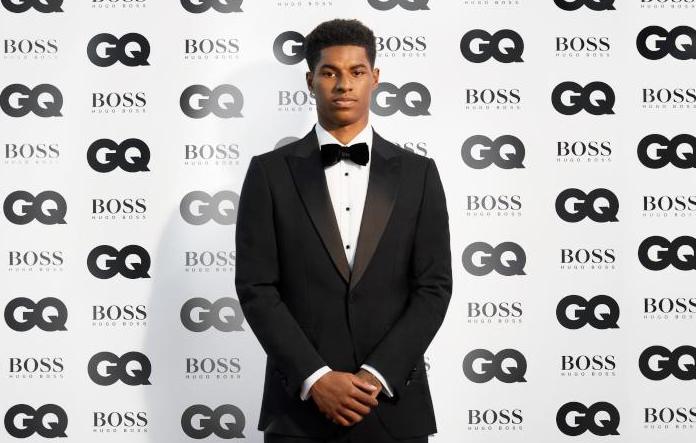 Sorry, Chris Evans. I know my love for you has reigned supreme ever since you busted out a whipped cream mankini a la Varsity Blues. Since then, my thirst horizons have expanded to encompass a broader palate that’s both far trashier and much more sophisticated. (But, like, I wouldn’t say no to you, either. So.)

And now, my hall of crushes has a brand new knight: Marcus Rashford.

Like many places around the world, Britain is overflowing with citizens who are food insecure. It was already a problem before and then COVID came along and shone a giant, unrelenting spotlight on it. Unsurprisingly, even with a glaring spotlight illuminating the issue, most chose to ignore it, in the hopes that it would magically just disappear.

Enter Marcus Rashford. Instead of sitting around and watching kids go hungry, this 23-year-old Manchester United football star decided to do something. What makes this decision especially poignant is that this was more than just a celebrity paying lip service to a charity. For Marcus, this was personal.

He recalled his own history with food insecurity growing up- a story he’s been openly, unapologetically sharing alongside his total badass of a mom, Mel. And then he decided to devote his time, money, and energy to singlehandedly putting an end to Britain’s hungry crisis. He turned his Twitter account and social platforms into HQs for sharing information and resources to help during this hunger emergency.

He tried to petition the British government to extend free school lunch vouchers - not once, but twice. His efforts to inch Boris Johnson an iota closer to having a soul, sadly, didn’t always succeed. Still, he was able to leverage enough pressure that the government was shamed into acting, albeit temporarily. Per Time Magazine, “on June 16 it backtracked after the public rallied in support of Rashford’s campaign, allowing 1.3 million children to claim free school meal vouchers over the six-week period.”

That wasn’t enough change for Marcus. He also just filmed and released a BBC One documentary called Marcus Rashford: Feeding Britain’s Children. This is truly a culturally significant film that will help humanize this far-too-frequently dismissed struggle and put a celebrity face on the movement.

There’s nothing more attractive than a person who steps up and uses their platform to give back to the community in a selfless, positive, and impactful way. That’s why, in my humble opinion, Marcus Rashford should get all the accolades - including a highly coveted inaugural spot on the Pajiba 10 list.

I mean, come on. This absolute gem of a human being flipped the script and used his celebrity to engage in a game of poverty chicken with the British government. Plus, my man looks damn good in a suit.

Oh, wait, did I say he looks good in a suit? I meant to say that he looks good just, generally speaking, all the time, always. I’m clearly not alone in my admiration, either - his fans are already calling for him to get his knighthood. And rightfully so.

So there you have it. Frankly, if you need any more evidence beyond this, then we’re going to have to sit down and have a serious talk about your priorities.

← We Really Do Need To Talk About That Photo Of Oscar Isaac In His '90s Ska Band | Review: Chadwick Boseman is Excellent in His Final Role in Netflix's 'Ma Rainey's Black Bottom' →