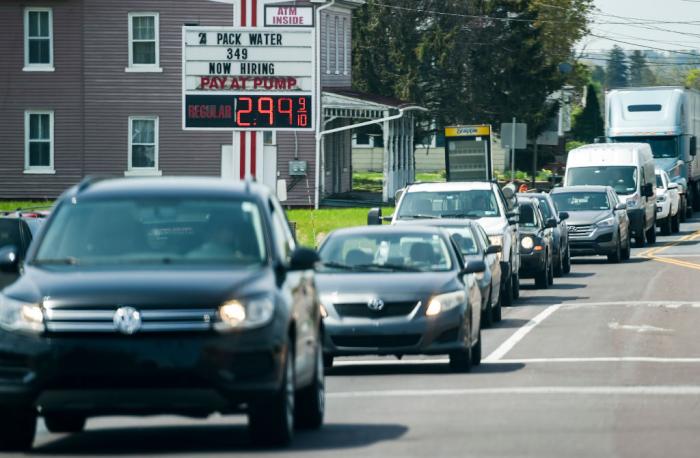 Remember last year when terrified Americans were buying up toilet paper in such quantities that shelves were empty and the unfortunate among us were left to wipe our asses with pinecones? (Note: I’m told that was just me.) Because I sure do. It became a self-fulfilling prophecy as people with already full cupboards bought enough single-ply to insulate their homes. Sure, pulp mills were short-staffed and sick truckers couldn’t do their runs, but the human drive to collect every last scrap for themselves exacerbated the problem far beyond the actual supply chain issues. Well, we’re up to our old tricks, this time with gasoline.

Last Friday the Colonial Pipeline shut down its main pipeline in response to a cyber attack. The 5,500 mile pipeline runs from the Gulf Coast to New Jersey and is responsible for most East Coast fuel deliveries. A Russian hacker group called “DarkSide” is allegedly to blame, but if you ask me, Colonial Pipeline shares plenty of responsibility for not appropriately securing its systems. The group got over 100gig of data in the ransomware attack, and Colonial Pipeline has shut down its deliveries until further notice until it has patched the associated holes in its cybersecurity. The company hopes to be back to full production by the end of the week. In the meantime, the governors of Virginia, Florida, North Carolina, and Georgia declared states of emergency and pled with their constituents not to hoard gas.

Spoke w/ @ENERGY earlier re: the #pipelinecyberattack Folks, it should be operational in a few days. Please do not fill up your car unless you need to and do not fill multiple containers. Overreacting creates more of a shortage. Please use common sense and patience! #alpolitics

Shared by a friend in Tallahassee: selfish idiots gas hoarding and turning the SUV into a Molotov cocktail pic.twitter.com/QABR42dFz9

A friend of mine took this pic in #RVA yesterday - truly taking gas hoarding to the next level 🤦🏻‍♀️ pic.twitter.com/cxHa766qLm

Here’s the thing. This is only a temporary shortage. If people got their act together and only bought the gas they needed, everything would be fine. We could all drive to work and the grocery store and school and … well, those are pretty much the only places you can go these days, but still. We’d be fine. Instead, short-sighted, selfish goobers are acting like it’s the End Times and they need to top up their generators before Immortan Joe and his bully boys show up to steal their women and eat their babies. Things will go back to normal and these chuckleheads will be left sitting on hundreds of gallons of highly flammable gasoline just waiting for an unfortunate spark or even an extremely hot summer day. I think we can confidently assume the type of person who feels they need to hoard gas is the last person we should trust with it. So take a calming breath, folks. Things should be back to normal by the end of the week. Just be careful where you throw your cigarette butts.

Finally, I wrote this article mostly so I could share one of my very favorite videos of 2019, in which a woman puts plastic grocery bags full of gas in her trunk. In case you aren’t aware, gasoline dissolves some plastics. If you dissolve styrofoam in gas, for example, you get napalm. So if you hear about some fool exploding before the week is out, don’t be surprised.

← Who Are The 'Top Chef' Frontrunners And More On Podjiba! | Twitter Users Ponder Random Things From the '80s an '90s That Wouldn't Make Sense to Kids Anymore →