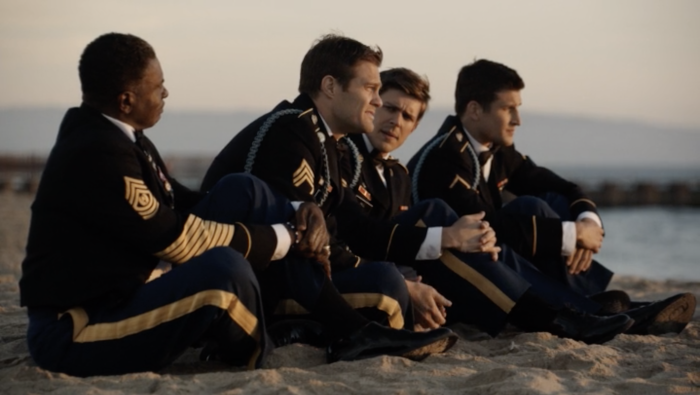 Watch 'Enlisted' on Crackle, You Cowards!

Back on Monday, the most wonderful news appeared on twitter dot com:

Yes, Crackle, which is now majority owned by Chicken Soup For The Soul (seriously) and is being rebranded Crackle Plus and which Lord Castleton and I definitely never made fun of, is now streaming one of my favorite one-season shows of all time, because they are heroes, clearly.

Enlisted, which was created by Kevin Biegel in 2014 (who came up in the Bill Lawrence camp of comedy writers, working on Scrubs before co-creating Cougar Town with Lawrence), is a sitcom centered around three brothers serving together in a rear detachment unit of the Army - meaning they’re the soldiers who remain stateside taking care of the base while other units are deployed overseas.

Much like Biegel’s other work (and the work of EP Mike Royce, whose name you might recognize from the recently rescued One Day At A Time or the also cancelled-too-soon Men of a Certain Age or Everybody Loves Raymond), the show is incredibly funny and goofy, only to turn around and hit you with an emotional gut punch that you’re somehow never ready for, even if you know it’s coming. The show was beautiful and cathartic and five years later I still wish we’d had a chance to see more episodes, although the ending that they came up with was kind of perfect.

Speaking of getting to that ending properly - Enlisted is one of those shows that was aired out of order, and they remain out of order here, so listen to Royce and watch the episodes the right way:

Honestly, I was planning on just going on and on about Enlisted for a few thousand more words (I mean, have you watched the ‘Vets’ episode yet? Or ‘Homecoming’? And THOSE AREN’T EVEN THE FINALE OH GOD HOW DID ALL THIS DUST GET IN MY EYES STUPID INDOOR APARTMENT WIND), but I accidentally scrolled through the Crackle website and I noticed that they’re filling a very specific programming gap in our streaming apocalypse:

They’re showing a surprising number of short-lived shows that fell through the cracks, or underrated shows that have been left behind.

For example, there are a number of one-season shows available that were never popular enough to be purchased by the bigger sites, like The Michael J. Fox Show or Mr. Sunshine or The Unusuals.

Then there are the shows that, for whatever reason, haven’t streamed elsewhere and could definitely find a new audience, like Barney Miller or Just Shoot Me! or NewsRadio (why don’t we talk more about NewsRadio? There’s a whole generation out there who has no idea who Phil Hartman was, and that makes me sad).

And then there’s the stuff that feels kind of like it’s just for me, like Parker Lewis Can’t Lose (kids, this was a weird early FOX sitcom that was kind of like Ferris Bueller’s Day Off (okay, stay with me here, but Ferris Bueller’s Day Off was a classic 1980’s movie starring Matthew Broderick (oh, right. You remember that Honda commercial from the Super Bowl several years ago and I was shaking my head and you said who’s that old dude… you know what, never mind, I’m closing these all down))) or The Dana Carvey Show.

As Tori reminds us every month, there are always new shows and movies becoming available to stream from the major providers - and there are only more streaming services about to launch in the next year. It’s impossible to know, long-term, whether Crackle will survive, even as they play in a slightly different space (free, ad-supported) than most of the others. But the niche they’re currently filling, whether by design or by necessity, makes it, at minimum, an interesting place to check out from time to time, to see what they have available that I might have missed or wish I could revisit but could never find.