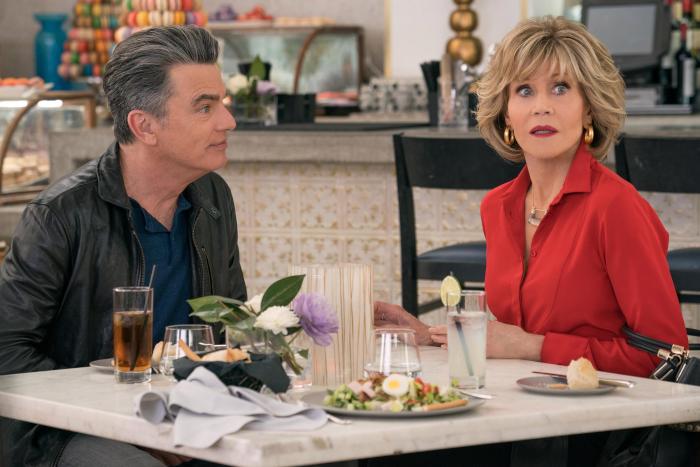 WHAT THE HELL, NICK?

I wrote that headline as “WHAT THE HELL, NICK?”, but I really meant it more like “what the hell, NICK.” No question mark. I want you to imagine a real Season-Two Jessica Day line reading of that name. Really stretch it out. NI-ICK. Maybe even three syllables. What the hell, NI-I-ICK? Emphasis on the “ick” part. Because I want to make this clear: I’m very, very upset with Devoted Husband and Great Eyebrow Haver Nick Skollka played by real-life Great Eyebrow Haver and Enthusiast Peter Gallagher. See, at the end of last season, Grace and Nick had eloped to Vegas after some turmoil between Grace and Frankie. None of that really matters because Grace and Frankie are rock solid, and their whole thing was resolved by the end of episode one. This gave us the chance to see something that’s been largely missing from the entire series: a guy being a kickass husband to his bitchin’ wife (technically we did get to see a brief second of Bud being kickass to bitchin’ Allison, but they literally got married a second ago so we’re starting fresh with them, too. Bud, to his credit, has been a consistently kickass partner to Allison).

Then Nick went and Nicked all over it. NICK.

First, he conveniently forgot to mention the fact that his business partner Miriam is also his ex-wife and the mother of his son. This is a thing you have to mention when you introduce Miriam to your current wife. You can’t actually pretend that it was such a long time ago that you don’t really think about her as your ex-wife anymore. You put a baby inside her, NICK. You remember that shit. Also? Your ex-wife is Mary Fucking Steenburgen. If you get to sleep with Mary Steenburgen, you tell people.

And bear in mind, I wrote “first” up there. His “first” screw up was that he didn’t disclose to his wife that his ex-wife is still his business partner. (Also, yes, I know exes can be friends and supportive and kind to each other. I’m not arguing he has to treat his ex like they never met, I’m saying you can’t have a totally friendly, non-issue relationship with your ex-wife if you don’t feel comfortable mentioning it to your current one.) His second cockup was that he didn’t bother filling Grace in on some of the other aspects of his business. Like the fact that he was being investigated by the FBI for, I guess, just being a business criminal. They never really explain that part too much. You know who else never explained too much what it was that Nick was doing? Fucking Nick. To his wife. Whose finances he put in jeopardy. Yeah, the reason that uber-rich Grace Hanson’s credit cards were being declined at the dump-everything-out-on-the-table-seafood place? It was because the government froze Nick’s assets, and, as a result of him marrying Grace without disclosing any of his financial troubles so that she could cover herself legally, Grace’s assets too. NICK. YOU DO NOT MESS WITH A WOMAN’S FINANCES.

Now, look, maybe things did spiral after they got married. Maybe FUCKING NICK was too afraid to tell Grace how hard he’d fallen because he was worried she would leave him. And most of the time when people get themselves into financial trouble, the hardest part is admitting out loud that things are bad. But that doesn’t explain how NICK still decided to tell Grace not to accept a deal from Mark Cuban on Shark Tank. A deal that he could have made sure was entirely in Grace and Frankie’s names so that he and his business crimes couldn’t infect it. A deal that maybe could have taken care of his elderly wife in her retirement since he’s not going to be around to do that since he’s going to jail. But then NICK would have had to get over the fact that Mark Cuban insulted Nick by *checks notes* having more money than he did.

Also, being a billionaire is morally indefensible.

← The Worst Sex Scenes in Fiction | An Open Letter to Ryan Gosling: Where Are You? Come Back to Us! →